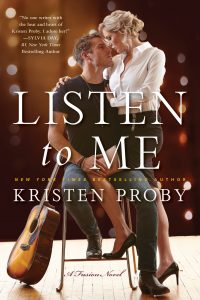 In New York Times and USA Today bestselling author Kristen Proby’s brand new series, five best friends open a hot new restaurant, but one of them gets much more than she bargained for when a sexy former rock star walks through the doors—and into her heart.

Seduction is quickly becoming the hottest new restaurant in Portland, and Addison Wade is proud to claim 1/5 of the credit. She’s determined to make it a success and can’t think of a better way to bring in new customers than live music. But when former rock star Jake Keller swaggers through the doors to apply for the weekend gig, she knows she’s in trouble. Addie instantly recognizes him—his posters were plastered all over her bedroom walls in high school—he’s all bad boy...exactly her type and exactly what she doesn’t need.

Jake Keller walked away from the limelight five years ago and yearns to return to what’s always driven him: the music. If he gets to work for a smart-mouthed, funny-as-hell bombshell, all the better. But talking Addie into giving him the job is far easier than persuading her that he wants more than a romp in her bed. Just when she begins to drop her walls, Jake’s past finally catches up with him.

Will Addie be torn apart once again or will Jake be able to convince her to drown out her doubts and listen to her heart?

“What is up with me being so damn attracted to the bad-boy musician type? It never fails. If there’s a bad-boy musician within a thirty-mile radius, my girl parts are on high alert. Every. Single. Time.”

Addison has just started a successful restaurant – Seduction – with her best friends. She loves the job and enjoys spending her days and nights with her girls. Addison has the bad habit of falling for tattooed musicians over and over again. And over and over again, she ends up with hurt feelings. After finding her latest boyfriend in a compromising position, she swears men off. Hiring Jake Keller to perform at Seduction makes her question her decision.

“I stand straight and smooth my hands down my leather vest and over my skinny jeans at my hips, then jab my finger at my reflection. “Jake is not hot. You’re not interested. Get over it.” I give myself the stink eye before marching out of the bathroom, with my new armor intact.”

Jake Keller – or Knox, as his fans know him – has lived a quiet life the past years. After having lived the life of a true rock star, having hit rock bottom he has changed his life drastically. No more preforming, no alcohol, no drugs. Just working with his friends in a studio and playing music. Being pushed by one of his best friends, Jake applies to an ad for a weekend musician from Seduction, where he meets Addison. All he can think about is getting to know her better.

“And suddenly the air is stolen from my lungs. This is the woman I saw the other night at the club. The one I couldn’t take my eyes off of. The one that made the rest of the room fade away. The only word I have for her is bombshell, and I’ve never used that word in my life.”

Being burned by musicians to many times, Addison tries to keep Jake at arm’s length, even though she’s very attracted to him. Jake himself can’t stay away from Addison, he knows what he like in a woman, and she’s all he wants. Jake and Addison have great chemistry, and it doesn’t take long before they give into their feelings for each other. When Jake’s insecurities and false believes take over, he’s in for some groveling before Addison forgives him.

Listen To Me is the first book in the new ‘Fusion series’ by Kristen Proby. I like the leading couple, as well as the secondary characters. Like her other books, Listen To Me is a well written, sweet and easy read. This being the first book in the new series, the leading ladies for the next books are introduced. I’m curious to see the men these independent women will fall for.

“Addie, I can’t promise you that there won’t be times I fuck up or that things won’t ever feel broken.” His voice is a shaky whisper, his mouth planted against my temple. “But I can promise you that I will never walk away from us.” Us. Not me. Us.”

I’ve enjoyed reading Listen To Me, I give this story 4 stars.

~~ Listen To Me was provided in exchange for an honest review ~~

“‘In summary,’” Cami, one of my very best friends, and a business partner, reads from thePortland Tribune, “‘Seduction is a restaurant unlike any other I’ve experienced. The food is delicious, the wine bar impressive, and the ambiance so sexy, it will take your breath away. I highly recommend this restaurant for your next date night.’”

“I want to send that reviewer flowers,” Mia says with a wide smile. “Who would have thought that just six months after opening this place, we’d already have a review like this?”

“Well, it’s a no-brainer that they’d love the food,” I reply, and reach for the paper so I can read it again for the fifteenth time. “You’re a genius in the kitchen, Mia. We’ve known that since we were in high school.”

“I still get nervous, especially now that I never know who the customers are going to be. We didn’t even get a heads-up that this guy was going to be here.” Mia bites the cuticle on her thumb and frowns. “Maybe I should add to the menu.”

“The menu is perfect,” Cami replies with a shake of her blond head.

We smile at each other, and finally I do a little happy dance in my seat. We haven’t opened for the day yet. Kat and Riley, the final two business partners in our fivesome, haven’t arrived. But Mia, Cami, and I have read this article over and over again, smiling and dancing.

Because damn it, we’ve worked our asses off since we opened the doors six months ago. All of our eggs are in this basket. We can’t fail.

We hear the front door open and close, and I expect to see either Riley or Kat, but instead Jeremy saunters into the dining room, looking all rumpled and messy from sleep. His eyelids are still heavy. His chin is scruffy. His blond hair is standing on end, still in chaos from my fingers last night.

He grins and kisses my head, then picks up my coffee and sits next to me.

“Why are you here?” Cami asks with a frown. “I’m in too good of a mood to have to pretend to like you.”

I glare at my best friend, but she just shrugs.

“My girlfriend is here,” Jeremy replies and sips my coffee. “I missed her.”

“Please,” Mia whispers with a roll of the eyes. My friends used to like Jeremy, in the beginning, but now they make it no secret that they don’t care for him. But they are just overprotective. They don’t want to see me get hurt. Sure, he’s a musician. Not a particularly gifted one at that, but he does well, booking gigs for his band, Hells Roses, regularly.

And, oh my God, what the man can do in the bedroom should be a felony. He makes me laugh, and despite his arrogant persona around everyone else, he has moments of real vulnerability and sweetness when we’re alone.

Is he the one? Probably not, but I’m pretty much convinced that the one was invented by romance novelists and Disney. “Be nice,” I snap and continue to read the paper. “We got a kick-ass review in the Tribune,” I inform Jeremy with a grin.

“Of course you did,” he replies and kisses my cheek. “Are the music reviews in there too?” He snatches the paper and shifts through the pages, then reads through the reviews of the music and club scene in Portland. “Not one fucking mention?”

Cami catches my gaze, then crosses her eyes in annoyance. I simply shrug. He’s not in the restaurant business. He wouldn’t understand what a big deal this is for us.

“I’ve been thinking,” I begin, and lean my elbows on the table. “Now that business is picking up, I think we should add live music on the weekends.”

Thank God. Jeremy’s band isn’t the one I’d want for my place. But rather than jab at his ego, I simply smile and kiss his shoulder.

“I know, babe. But I’d still like to bring in someone.

Maybe just a one-person act, just a microphone and a stool, you know?”

“We can afford it,” Cami replies with a thoughtful frown. Cami is our chief financial officer. She handles all things money, and she’s a wizard at adding up figures in her head. “Who are you thinking?”

“I don’t know.” I reach for my coffee mug and frown when I see that Jeremy has sucked down every last drop. “Babe, will you please run over to Starbucks and get us more coffee?”

“I forgot my wallet,” he replies with a scowl. I reach into my bag and pass him a twenty. “You got it.”

“Oh, and one place you might look for a musician,” he adds as he steps away from the table, “is the open-mic night at Crush this Saturday. There are usually some good acts there. I’d bet you’d find what you’re looking for.”

I grin at my sexy boyfriend and blow him a kiss. “Thank you.”

He winks and saunters out of the restaurant. When the door closes behind him, Mia shakes her head at me. “Seriously?”

“Open mic night is a brilliant idea,” I inform her.  “That’s not what she’s talking about,” Cami says. “Jeremy is a douche bag.”

“He is not.” I roll my eyes and sit back in my chair. Okay, maybe he has douchey moments. “He’s sweet. And sexy.”

“And mooching off of you. His wallet was in his back pocket,” Mia argues. “And I’ll bet all of this month’s chocolate budget that he’s staying with you too.”

“His roommate moved out, and he couldn’t afford his place alone.”

“Addie.” Cami reaches for my hand. “You are not a doormat.”

“Yes. He does.” Mia sighs and takes my other hand. “You deserve so much better.”

“I love you both,” I begin, my stomach heaving. “I know you just want to protect me. Jeremy is a good guy. I like him.”

“Okay.” Cami sips her coffee, then shrugs one slim shoulder. “But when he breaks your heart, we’ll be here.”

“Let’s talk about this open-mic night. Who’s going with me?”

“I’ll be working,” Mia says. “I have some new Saturday night specials I want to try.”

“I don’t want to,” Cami says honestly. “I trust you to find exactly what we need.”

“I’ll take Kat.” I chew my lip, ideas already swirling in my head. “She’s a good judge of these things.”