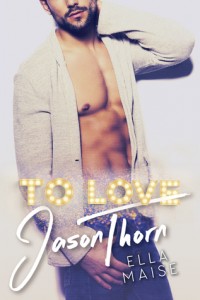 Oh, how stupidly in love with that boy I was. He was the first boy that made me blush, my first official crush. Sounds beautiful so far, right? That excitement that bubbles up inside you, those famous butterflies you feel for the very first time—he was the reason for them all. But, you only get to live in that fairytale world until they crush your hopes and dreams and then stomp on your heart for good measure. And boy did he crush my little heart into pieces.

After the stomping part he became the boy I did my best to stay away from—and let me tell you, it was pretty hard to do when he slept in the room right across from mine.

When tragedy struck his family and they moved away, I was ready to forget he ever existed.

Now he is a movie star, the one who makes women of all ages go into a screaming frenzy, the one who makes everyone swoon with that dimpled smile of his. Do you think that’s dreamy? I certainly don’t think so. How about me coming face to face with him? Nope still not dreamy. Not when I can’t even manage to look him in the eye.

Me? I’m Olive, a new writer. Actually, I’m THE writer of the book that inspired the movie he is about to star in on the big screen. As of late, I am also referred to as the oh-so-very-lucky girl who is about to become the wife of Jason Thorn.

Maybe you’re thinking yet again that this is all so dreamy? Nope, nothing dreamy going on here. Not even close.

Earlier this year, I picked up the “Alexander & Maya Series” by a fairly new author, Ella Maise. And although the story was heartbreaking at times, it was sensual, well-written, and I loved it. Knowing the author was working on a new story, I couldn’t wait to read it. Going in, I knew To Love Jason Thorn would be different from the earlier mentioned series, so I was curious. Now I’m finished, I absolutely don’t mind the difference, I adore this book.

“He had touched my chin and looked into my eyes. Jason. Our one-dimpled new neighbor. Had. Touched. Me. Ah… I was pretty sure he’d fallen in love with me, too. I mean why else would he smile, look into my eyes, and touch me, if he hadn’t? Right? Right?!”

Olive Taylor has grown up in a happy family; loving parents and a protective older brother, Dylan. When she’s six years old, new people move in next door and Olive is enamored by the son, Jason, from the moment she sees him. Jason and Dylan become best friends, and because of his home life, Jason spends a lot of time in the Taylor house. Over the years, Jason remains Olive’s secret crush, even when he moves away after his mother’s death. Nowadays, Olive studies English Literature and has published the book she has been working on for years. She is still amazed by the fact that people actually buy her book and read it. What amazes her even more, is that a studio wants to make her book into a movie and bring it to the big screen, involving big name actors. She is shocked when she finds out Jason is picked by the studio to play the leading role in her movie, seeing him brings back all the feelings she had for him all those years ago.

“Was that my voice that was trembling? He was still my first crush and my first heartbreak, but he was also Jason Thorn. The Jason Thorn who was only twenty-six and had two Oscar nominations under his belt, but I wasn’t going to think about what was under his belt because that would be bad. Really bad.”

Growing up, Jason Thorn didn’t have an easy childhood, when his father left his mother drowned in her sorrow, drugs, and alcohol. Living next to the Taylor family made everything a lot better for him, the family became his second home where he was always welcome. Jason is living the life of a typical movie star; no relationships, but always in the company of willing women who throw themselves at him. This carefree lifestyle has caused him problems—producers and film executives don’t want to work with him because they’re afraid his behavior will turn away the public. Due to Jason’s current behavior, his manager feels a romantic movie is a good move to turn the public opinion around. Discovering little Olivia is the author of the book he’s about to bring to life on screen, Jason finally sees a very good reason to stop his damaging ways.

“I smiled and said, “Hi.” She bit on her lower lip and smiled back shyly. “Hi back.” “I missed you, little one. I didn’t even know how much until I saw you.” Her smile faltered a bit, but she managed to turn it into a lopsided smile, which looked strangely attractive on her.”

The moment Jason and Olive meet again after all these years, all of the feelings Olive had for him come right back to the surface. Jason instantly notices his little one, Olivia, isn’t so little anymore, but grown-up and attractive. When his past indiscretions are catching up with him, Jason’s team comes up with a plan to redeem him in the public’s eye. This plan includes dating and marrying a good, nice girl and stay out of trouble for a few years. When the clear attraction between Jason and Olive is noticed, not only by his team but also by the public, the plan soon includes Olive as the fiancé. Because of all the time they spend together, not just because of said plan, something real and life-changing is growing between the couple.

I have enjoyed reading about young Olive and learning about the past she and Jason share. Grown up, Olive is a normal student with a normal life who just happened to have written a very popular book, staring her childhood crush as the leading man. Jason is a movie star, enjoying the things that come with his fame. With Olive on the other hand, he is a sweet and caring man, very different from how he treats other people. To Love Jason Thorn has a whole different vibe from the other books I’ve read by Elle Maise. This book is much lighter, friendlier than the others. I also liked the supporting character—they’ve provided the couple with needed advice and support. My only problem? The villains got of too easy, I wish their actions had more actual consequences.

I adore this book. When I was finished I had a big smile on my face. I give this story 4.5 stars.

Her gaze dropped down to my chest and her eyes slightly widened as if she was just realizing there was a half-naked man right in front of her. When her eyes started to trail lower, my skin prickled and I had to fight with my body to not react to her beautiful wandering eyes. “I…I should take a shower first so I’ll just…” Her eyes jumped between my eyes and collarbone. “I’ll head to the other room and grab…my things. I’ll be right back.” She patted my arm and ran away.

Chuckling, I got into bed.

Twenty minutes had passed when she finally put her knee on the right side of the bed and climbed up next to me. There was too much space between our bodies for us to ever come in contact, but instead of lying on the very edge of the bed like I was doing, she quietly got under the covers and settled in the middle.

Maybe she just wanted to lay in the middle so we could share the covers without having to pull on them? Or maybe she was a turner, and to avoid tumbling down, she needed to fall asleep far away from the edge? Either way, I would stay on my side so it was okay.

Everything would be fine.

Another ten minutes passed and thanks to Olive’s tossing and turning, I was still wide awake.

Every single time she turned, moved, fluffed her pillow, or quietly sighed, my body got a reminder of her presence and of course acted accordingly. Hell, even her breathing was starting to get to me.

Groaning, I turned to my right to see her back facing me.

“Jas—” she started to whisper, but before she could finish my name, I reached out, splayed my hand on her stomach—thank god she was at least wearing something—and pulled her back against my chest.

She gasped and her body stilled. For a moment, I didn’t know what I should do with my hand, but then I decided to rest my palm on the bed, still keeping my arm against her stomach, caging her in. At least this way she would stop tossing and turning and we would finally go to sleep.

“Jason? Are you sleeping?” she whispered, not turning her head.

“What do you think?” I muttered.

My chest still cushioning her back, I pulled my hips a few inches back—just to make sure she wouldn’t feel anything she wasn’t supposed to feel—and gave her body a gentle tug with my arm.

A few minutes later, just when I was about to fall asleep, she started to wiggle her bottom. The little minx managed to rest her ass right above my dick. One wrong move and my already raging dick would have been resting right against her round, shapely ass—not that I had spent much time looking at it…

While her breathing had deepened shortly after she’d made sure her ass was perfectly placed to torture me, it took me hours to fall asleep, battling with the urge to move forward, just a few inches, just to let my dick cop a feel.