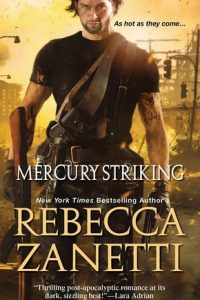 With nothing but rumors to lead her, Lynn Harmony has trekked across a nightmare landscape to find one man—a mysterious, damaged legend who protects the weak and leads the strong. He’s more than muscle and firepower—and in post-plague L.A., he’s her only hope. As the one woman who could cure the disease, Lynn is the single most volatile—and vulnerable—creature in this new and ruthless world. But face to face with Jax Mercury…

Danger has never looked quite so delicious…

Since I’ve started watching ‘the Walking Death TV series’, books located in the apocalyptic world have my interest. While in a lot of the books morals have disappeared along with modern civilization – but that doesn’t take away from me enjoying those books. Mercury Striking is a story about surviving in a new, harsh environment where the lines between good and evil are blurred. This story is the first book in the ‘Scorpius Syndrome series’, and it pleasantly surprised me.

“The smell had saturated the wind as she’d trekked across the country. The world was littered with dead bodies and devoid of souls. A click echoed in the darkness. About time. Predators, both human and animal, crouched in every shadow, but she’d made it closer to what used to be Los Angeles than she’d hoped.”

Lynne Harmony is on the run from a government she no longer trusts. As a scientist, she was directly involved with the team responsible for the creation of the deathly virus – Scorpius – that has wiped out 99% of the world’s population. In the process of attempting to create an anti-virus, Lynne got infected herself, and somehow survived making her a valuable asset. To accelerate her capture, the remaining government spread the rumor Lynne carries an even deadlier disease, in the hopes people will capture her. Lynne is on her way to Los Angeles, trying to find leads to a possible cure in a hidden facility, and seeking the protection of a modern legend, Jax Mercury. Getting involved with a man isn’t anywhere on her agenda, but she can’t help the feelings she develops for Jax.

“Nobody hates you.” “Yes, they do,” she hiccupped, crying harder, her body shaking. He sighed and dropped onto the sofa, holding her closer, tucking her face into his neck. “We fear things in direct proportion to our ignorance of them.” His breath brushed her ear, and his size provided safety.”

Jax Mercury has survived a brutal childhood, he has escaped gang life, and joined the army to become a better man. When the world collapsed after the outbreak of Scorpius, Jax used his experience and skills to create a safe haven in the Los Angeles area – a place for men, women, and children to survive this brutal new world. This has made him some kind of legend, people come to him for protection and a place to live. Always working on new ways to find new food sources, thinking about security strategies, and fighting enemies to protect the safe haven, any kind of relations with the opposite sex are off the table. Lynne’ calling to him on a primal level is a surprise, but not an unwelcome one.

“Yes. Lynne Harmony was stunning as well as desperately wounded. Delicate and fierce. One hour with her, and she’d brought out something in Jax he neither wanted nor needed—the urge to save her. He couldn’t appreciate what made her pretty, and he couldn’t compromise on the mission.”

Although Jax and Lynne feel an attraction for each other, they don’t want to get emotionally involved. They have intimate moments and they talk, but key-information is hold back from one another. Slowly, the couple starts opening up to each other, sharing more and more about their past, and more importantly, the secrets they both are keeping. What begins as a casual hookup, to forget the gruesome world they live in, gradually changes into something much more.

This is not just the story of Jax and Lynne, it’s also the tale about surviving in a world completely changed after the outbreak of a deadly disease. Imagine a world with no electricity, no internet; a world without all the things we take for granted. As already said, Mercury Striking is the first book in the ‘Scorpius Syndrome series’, therefore a lot of characters are introduced and a lot of information is being given. After reading this book I learned about the prequel Scorpius Rising, published in the anthology On the Hunt. Although this novella provides the backstory to the early days of the virus, I didn’t feel like I was missing information.

“There was so much he wanted to say, but he couldn’t find the words. He’d always been much better with action than with speech. “I need you here and safe for when I get back.” She smiled, her lips settling into an enticing curve. “You mean a lot to me, too.” He didn’t have time for emotion, and he didn’t have the need for somebody in his life, but it was too late. Here she was, and he wasn’t letting her go anywhere.”

I’ve enjoyed reading Mercury Striking and I will definitely pick up the next book in the series. I give this book 4 stars.

~~ Mercury Striking was provided in exchange for an honest review ~~