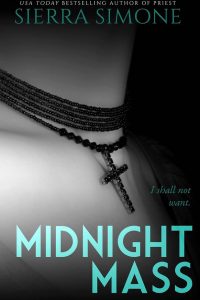 We are told that God will punish the wicked. That sinful men will reap what they sow. We are told to scourge our souls with prayer and pain to become clean once again.

Well, here I am. Wicked and sinful. Desperate to become clean…even though it feels so good to be dirty.

But even I never expected what came next.

Even I never expected my punishment to come so soon.

***Midnight Mass is a novella and a sequel to Priest. It’s intended for mature audiences only.***

Earlier this year, I’ve read a book by a – for me – new author, Sierra Simone. The book was called Priest, and it was a very sensual, somewhat forbidden, book about a priest and his sexual escapades with a woman new to his church. I love Priest, so I was excited when I learned a follow-up novella was being written. Midnight Mass certainly didn’t disappoint.

“Mine. Even after three years of marriage, that word still punctured me, pained me with the beautiful awe and wonder of it all. This woman, this polished, driven, smart-as-fuck woman, had chosen me.”

It is three years since Tyler Bell, or Father Bell as I still would like to call him, has left the church and priesthood to marry his beloved Poppy. Although he followed his heart, he still experiences moments of doubt and guilt. Guilt over what happened to his sister, guilt over failing as a priest and doubting if he deserves a beautiful, kind woman like Poppy. After leaving the church, Tyler is studying at Princeton University and writing his final thesis, while Poppy is busy with her own work at the charity foundation.

Tyler is at the brink of finishing his thesis, which takes up a lot of his time, so much time there’s almost no room left for Poppy and their life together. Poppy doesn’t complain, but Tyler knows she isn’t happy with their current situation. They still have very hot sex where Tyler is the dominant, almost dirty man we know from the previous book, but otherwise they don’t spent much time in each other’s presence. After Tyler has forgotten an important event from Poppy, due to understandable reasons, she finally has enough.

“I’d fucked up. I wasn’t looking in the mirror right now, but if I was, I wouldn’t recognize the man standing there. He wasn’t a priest. He wasn’t a good man, and he certainly wasn’t a good husband. And when I looked into Poppy’s newly tearful hazel eyes, I knew that nothing was okay.”

Just as Priest, Midnight Mass is almost completely written from Taylor’s point of view. Tyler knows what he wants, a happy life with Poppy, but writing his thesis just takes over. He understands what he is doing is hurtful to his wife, but his inner scholar just can’t stop. When Poppy takes a timeout, he finally realizes he needs to change his ways. I love seeing Tyler and Poppy again, see them as a married couple with problems and thoughts I could relate to. It was also good to see more of both their families, and how they interact with each other.

Although I wish Midnight Mass would have been longer, I loved it. I give it 4 stars.