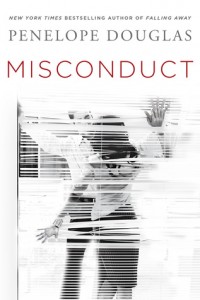 Former tennis player Easton Bradbury is trying to be the best teacher she can be, trying to reach her bored students and trying to forget her past. What brought her to this stage in her life isn’t important. She can’t let it be. But now one parent-teacher meeting may be her undoing…

Meeting Tyler Marek for the first time makes it easy for Easton to see why his son is having trouble in school. The man knows how to manage businesses and wealth, not a teenage boy. Or a young teacher, for that matter, though he tries to. And yet…there is something about him that draws Easton in—a hint of vulnerability, a flash of attraction, a spark that might burn.

Wanting him is taboo. Needing him is undeniable. And his long-awaited touch will weaken Easton’s resolve—and reveal what should stay hidden…

Last year I finally started ‘the Fall Away series’ by Penelope Douglas, and although the characters were young – and thus made some less grownup decisions – I liked it. Waiting for the other book Ms. Douglas just published, Corrupt, I was pleasantly surprised she was working on a second book, Misconduct. While I’m really curious for the first mentioned book, I have decided to start with this one.

“He wasn’t wearing a mask like most of the other guests. According to my father’s general wisdom, it probably meant that he didn’t play games or feel the need to be a part of the crowd. He wanted everyone to know who he was. Fearless, bold, a rule breaker…”

Easton Bradbury is a former tennis player. Her childhood is spent on the tennis court – when her parents find out her potential, all family activities are set aside for tennis, including the activities of her brother and sister. An accident causing the loss of her parents and sister make an end to Easton’s very promising tennis career, Jack – her brother – is all she has left in this world. All of the training, tennis playing and some unpleasant experience has made Easton not a very social woman. She keeps other people at a distance, and is living basically a lonely life. At age 23 she has finished her education and is ready to start her new life; history teacher at an elite private school in New Orleans. A few months before she has met an attractive man, Tyler, at a Mardi Grass ball and hasn’t seen him since. During her first weeks she discovers Tyler is the father of one of her students, and thus forbidden.

“I darted my gaze over to Mr. Marek, and he turned his eyes away from the door and pinned me with a sharp stare. And then, like the raging sun over a cube of ice, his hard gaze melted, turning into one of knowing as realization hit, his eyes softened, and his mouth curled with amusement.”

Tyler Marek is a hardworking man. In his mid-thirties he’s leading his own company, and is about to announce his candidacy for senate. He wasn’t always the man he is today, in his youth he didn’t take things serious and was all about the parties. The birth of his unplanned son – Christian – at age twenty changed him somewhat, motivated him to work harder. With all the hard work, Christian wasn’t a priority in Tyler’s life. He did take care for him and his mother financially, but has been an absent father for most of the time. Over the years Taylor has had casual, low maintenance ‘relations’ with women who know not to expect more. When he meets Easton he’s intrigued by her, and can’t get her out of his mind. Discovering she’s his sons new history teacher makes her off limits, but he can’t resist the temptation.

“I should’ve kissed her that night. I should’ve looked down into those blue eyes and watched her lose control when I shut her up and made her melt like I wanted to. What I wouldn’t give to strip off those prim clothes I’d seen tonight, pin her to the bed, and…”

Although Easton isn’t an innocent 23-year old – she is a sexual active woman – she doesn’t have much experience when it comes to actual relationships. Her sport filled childhood and teenage years has left its mark on her, her brother Jack is basically her only friend. Tyler is much more world wise, is older and knows what he wants. When they meet for the first time, it’s under the masquerade of a Mardi Grass ball. They don’t know one another, they just talk and spend a short time together. When they meet again six months later in a classroom, sparks fly immediately. Both Easton and Tyler are attracted to each other, but they know a relationship between a teacher and a parent is not done. Fighting the chemistry between them is hopeless though, all they can do is give in to it.

Misconduct tells the story of two people – both shaped by their pasts – falling in love and trying to fight it. Easton by hiding behind her insecurities and her job – Tyler by using his son, his work, and his future plans for senate. The problems between the couple aren’t so much caused by outsiders, but triggered by their own thoughts and believes. The developing relationship between Easton and Tyler feels realistic, it doesn’t seems forced or fabricated. I really like Easton’s job as a teacher, and how she is using modern social media as an instrument to teach and get her students and their parents involved. Tyler is a father who has finally realized he needs to make his son his priority, that a man is not just defined by his actions in the boardroom.

“You’re going to get me into trouble with that mouth of yours, and I may not get everything I thought I wanted out of life, but if I don’t have you and my son, then the rest of it means nothing,” I told her. “You make me happy, my kid likes you, and I feel like I could do anything if I knew I was going to see you every day. I need you.”

I enjoyed reading Misconduct, it’s beautiful written in Penelope Douglas’ style. I give it 4 stars.