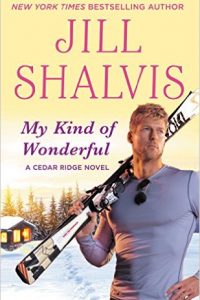 UNEXPECTED AND UNDENIABLE...
Bailey Moore has an agenda: skiing in the Rockies, exploring castles in Europe, ballroom dancing in Argentina. Now that she has a second lease on life, she's determined not to miss a thing. What she doesn't realize is that item #1 comes with a six-foot-one ski god hot enough to melt a polar ice cap. She doesn't want to miss out on him either, but Hudson Kincaid isn't the type of guy to love and let go. And as gorgeous as Cedar Ridge is, she's not planning to stick around.

As head of ski patrol at his family's resort, Hud thinks he's seen it all. But never has he run into someone like Bailey. She might look delicate, but her attitude is all firecracker. And her infectious joy touches something deep within him that he's been missing far too long. Now he'll just have to convince Bailey to take a chance on her biggest adventure yet . . . something rare and all kinds of wonderful.

For some reason, this is actually the first book I’ve read written by Jill Shalvis. Some of my book friends adore her writing, and I finally understand why. Going in, I didn’t know what to expect, but this book pleasantly surprised me. It’s a sweet book, without too much angst and over-the-top situations, just how I need my reads every now-and-then.

“For the first time she’d been the highest point, and everything below her—the world—was at her feet. And as someone who until very recently had never been in control of her own destiny, it staggered her. In a really great way.”

Bailey Moore has just been given a second lease on life, after having battled cancer for ten years, she has finally been declared cancer-free by the doctors. Living with a deathly decease for so long has impacted her life and that of her loved ones hugely. She never had a chance to act like a normal teenager, to be carefree and to enjoy life to the fullest. Her now ex-boyfriend and her mother know how sick she has been, still treating her like a fragile little girl, even after she is declared healthy. Being done with their smothering behavior, Bailey plans a list of things she wants to do to reclaim her life and celebrate it. Her list and her artistic job leads her to a ski resort in Cedar Ridge, where she meets Hudson who awakens feelings in her she has always dreamed about.

“Hudson. She couldn’t tell for sure of course, but the set to his shoulders reminded her of him. And then there was the way her heart started pounding. She had no idea what this odd hyper-awareness of him meant, but she was hoping it was nothing but simple orgasm withdrawal.”

Hudson ‘Hud’ Kincaid is a hardworking man, together with his half-siblings he is managing the family ski resort in Cedar Ridge. It’s a lot of work, hard work, since their father’s mismanagement drove the place almost to the ground. Hud doesn’t mind the long hours and all the labor, since this means working with his siblings he cares deeply for, and he can support his mother. Growing up with a mother who frequently checked out of reality, and a father who didn’t want his second family, Hud and his twin brother Jacob didn’t have an easy childhood. Their luck changes when their father’s wife takes the three of them under her wings, giving the twins and their mother a place to stay. Having his work and the care of his mother, Hud doesn’t have the time for a serious relationship, his plate is full as it is. Meeting Bailey makes him want to have more for the first time in years.

“Her smile was unguarded, easy. Contagious. And then there was her gaze, deep enough for a man to drown in. And in that single heartbeat, he felt the same urge he’d felt the first time he’d seen her. The urge to pull her in and stare into those eyes. They had something, he thought. An inexplicable chemistry.”

When Hud and Bailey meet on a mountaintop in Cedar Ridge, the two immediately feel something. They feel drawn to each other, but both have their own reasons not to pursue those feelings. What they do agree on is something casual, just sex and spending time together while Bailey is working at the ski resort. Of course, this no-strings relationship is destined to fail, both Hud and Bailey feel much more then they have agreed upon. Assumptions from both Hud and Bailey stops the couple from truly communicating, leading the way to heartbreak. Fortunately, Hud and Bailey both come separately to the conclusion they have to give their relationship a real chance.

Not having read the previous book in the series, Second Change Summer, this didn’t took anything away from me enjoying this book. Yes, the leading characters from the previous book appeared, but I didn’t feel like I was missing important information. Hud and Bailey are both real people with their own history, with real questions and feelings concerning their ‘fling’. I love how Bailey jumps into her new, cancer free life, doing the things she always wanted to do. I adore Hud for taking care of his ill, but funny mother, but I felt so sorry for him for not be able to fix things with his estranged twin brother. I also loved that both Hud and Bailey realized the mistake they were making, and were trying to make things right at the same time.

“She stared at him for a long time and he waited, trusting her to come to the same conclusion, that together they could face anything. “I signed up for the duration,” he said. “For the good, the bad, the ugly, everything. I’m in this, all the way in, Bailey. The question is, are you?”

I adore the sweet story of Hud and Bailey, a tale without over-the-top moments, crazy exes, and too much angst. I will definitely buy the previous book, and I can’t wait for the next addition in this series.

I give My kind of Wonderful 4.5 stars.