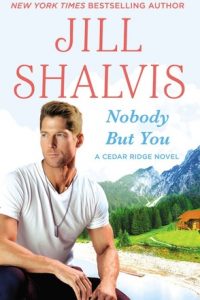 SOMETIMES YOU CAN GO HOME AGAIN…
After an overseas mission goes wrong, Army Special Forces officer Jacob Kincaid knows where he must go to make things right: back home to the tiny town of Cedar Ridge, Colorado. All he needs to scrub away his painful past is fresh mountain air, a lakeside cabin, and quiet solitude. But what he discovers is a gorgeous woman living on a boat at his dock.

Sophie Marren has nowhere else to go. She’s broke, intermittently seasick, and fighting a serious attraction to the brooding, dishy, I’m-too-sexy-for-myself guy who’s now claiming her dock. Something about Jacob’s dark intensity makes her want to tease—and tempt—him beyond measure. Neither one wants to give any ground . . . until they realize the only true home they have is with each other.

“Holding her gaze, he stripped and climbed into the bed, pulling her into the circle of his arms. A low, rough, heartfelt groan escaped him as he pulled her naked body to him. “We’re both home now,” he said.”

Jacob Kincaid didn’t had an easy childhood; his mother was a sweet woman, but she did lose touch with reality from time to time. Therefore, her young sons Jacob and Hudson had to take care of their little family. Things took a turn for the better when one of their father’s other women took the three of them under her wings, providing the means for a better life and future. But Jacob didn’t want to stay in Cedar Ridge, he wanted to go out in the world, make it on his own together with his brother. To his disbelief, Hudson chooses to stay in Cedar Ridge, and after harsh spoken words Jacob left. And now, Jacob is back to make amends. He didn’t counted on meeting a sassy redhead who makes him feel alive again.

“She’d made him smile. She’d made him laugh. The muscles around his mouth had pulled like they were rusty, and they were. Smiling had felt foreign and odd and… Good.”

Sophie Marren has grown up in a household filled with sadness; her dad is suffering from severe depressions, making him not paying any attention to his daughter. Grown up Sophie needs attention, and marries the first man who gives her a little of that. In order to please him, she gives up on herself and creates her whole life around her husband in order to please him. The marriage doesn’t last, and Sophie finds herself on the one possession she got out of the divorce, a boat. Meeting Jacob makes her rethink her choice to never fall for a man again.

“He was flesh and blood, with feelings and emotions, no matter how well hidden. It shamed her a little bit because she realized she wasn’t the only one hurting. He was just better at hiding it than she.”

Feeling attracted to each other, Sophie and Jacob don’t act on it until they have set some clear boundaries, or so they think. Both are not in a good place to start a relationship; Sophie is working through the aftermath of her divorce, Jacob is feeling guilty over abandoning his family and the death of his friend in Afghanistan. But it doesn’t take long before emotions and feelings take the overhand, changing the dynamic in the casual relationship they have agreed upon. After some heartbreak and hurt feelings both Jacob and Sophie are ready to take a chance at something real.

Nobody But You is the third book in ‘the Cedar Ridge Series’, and takes you back to the small town and the Kincaid family. Besides the love story of Jacob and Sophie, this a just as much the story of Jacob making peace with his family, especially with his twin brother Hudson (his story is told in the previous book of the series, My Kind of Wonderful). The problems Jacob and Sophie has to face aren’t caused by outside forces, but by their own insecurities and believes. This being a true Jill Shalvis book, the story is a sweet one; without over-the-top situations and overly angst-y moments.

“I need this with you, Soph,” he said. “But more that, I need you. You make me laugh. You keep me in the moment and yet you also make me believe in a future. I want you to know all this before I go because life’s short. Way too short to let go of something you know you want to keep forever.”

I love the sweet story of Jacob and Sophie, I give it 4 stars.

~~ Nobody But You was provided in exchange for an honest review ~~

Tags Cedar Ridge, Jill Shalvis, Nobody But You, Romance

2 Responses to “Book review: Nobody But You ~ Jill Shalvis”