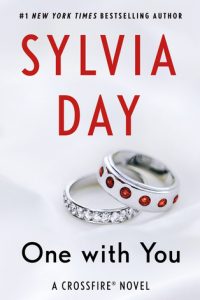 Gideon Cross. Falling in love with him was the easiest thing I've ever done. It happened instantly. Completely. Irrevocably.

Marrying him was a dream come true. Staying married to him is the fight of my life. Love transforms. Ours is both a refuge from the storm and the most violent of tempests. Two damaged souls entwined as one.

We have bared our deepest, ugliest secrets to one another. Gideon is the mirror that reflects all my flaws ... and all the beauty I couldn't see. He has given me everything. Now, I must prove I can be the rock, the shelter for him that he is for me. Together, we could stand against those who work so viciously to come between us.

But our greatest battle may lie within the very vows that give us strength. Committing to love was only the beginning. Fighting for it will either set us free ... or break us apart.

Heartbreakingly and seductively poignant,
One with You


is the breathlessly awaited finale to the Crossfire® saga, the searing love story that has captivated millions of readers worldwide.

A certain trilogy introduced me to modern romance books, but another series got me truly hooked;–‘the Crossfire series’ by Sylvia Day. One With You is the fifth and last book in the series, giving us the conclusion to the story of Eva and Gideon that started with Bared To You. I adore Gideon and Eva, and their road to happiness.

Eva has come a long way. The somewhat troubled woman changed into a strong and confident lady, sure of her relationship with her husband, able to pull him through his darkness. She doesn’t give up without a fight, but knows where to compromise and where to stand her ground. Gideon also changed a lot over the past three months. From the detached and in control man he has transformed into a passionate husband, who’s still fighting his demons, supported by his Eva. Slowly he’s learning how to deal with his past, and laying the blame with the responsible adults involved.

“Nothing could touch or hurt me when he was holding me. I wanted him to feel that same sense of security with me. I needed him to know he could drop his guard, take a breath, and I could protect us both. I had to be stronger. Smarter. Scarier.”

After the very passionate start of their relationship, with all its intrigues and twists, Eva and Gideon are starting to take it more slowly. After the crazy whirlwind they go out on dates, start acting like a normal couple. The sizzling chemistry is still there, but Eva and Gideon know they belong together, know nothing can break them apart, know they need each other like their next breath. Both still have some questions, but they talk to each other about what troubles them, seeking the opinion of the other.

“Eva was too independent, too fierce. She had a jealous streak a mile wide. She was demanding and suborn, and she defied me just to drive me crazy. And that friction worked in a way it never could have with any other woman, because Eva was meant for me. I believed that as I believed in nothing else.”

One With You starts were the previous book, Captivated By You, left off. Like the other books, One With You describes the lives of Gideon and Eva day by day, no lapses in time, no fast forward. Therefore, this book is set only three months after they’ve met. Although this is the story of Gideon and Eva, the tale of their road to a Happily Ever After, I felt there where a few loose ties. Some storylines are left wide open without a clear conclusion. Maybe it would have worked better for me if the epilogue was set further in the future, but that’s not how Crossfire series is written.

“Barely contained, like the vortex of a tornado. I would describe him as the calm after a storm now, which only made him an ever greater force of nature. We were both… centered now. Feeling confident and committed. Having each other made everything achievable.”

Although I give the overall love story of Gideon and Eva 5+ stars, due to my issues I give One With You 4.5 stars.

Tags Crossfire, One With You, Romance, Sylvia Day