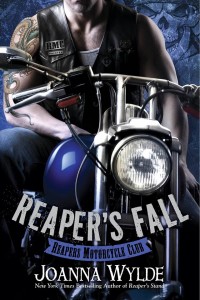 He never meant to hurt her.
Levi “Painter” Brooks was nothing before he joined the Reapers motorcycle club. The day he patched in, they became his brothers and his life. All they asked in return was a strong arm and unconditional loyalty—a loyalty that’s tested when he’s caught and sentenced to prison for a crime committed on their behalf.

Melanie Tucker may have had a rough start, but along the way she’s learned to fight for her future. She’s escaped from hell and started a new life, yet every night she dreams of a biker whose touch she can’t forget. It all started out so innocently—just a series of letters to a lonely man in prison. Friendly. Harmless. Safe.

Now Painter Brooks is coming home… and Melanie’s about to learn that there’s no room for innocence in the Reapers MC.

A favorite romance subgenre of mine is the so-called MC genre. For some reason, I like to read about tattooed, bad guys living on the edge. One of my favorite series in this genre is “The Reapers MC Series” by Joanna Wylde. Reaper’s Fall is the fifth book in the series, and I’ve been waiting for it a long time. It’s not my favorite Reapers MC book, but I’m definitely not disappointed.

Melanie Tucker isn’t lucky in life, her mother has abandoned her when she was a young teenager, and her father is a mean drunk who’s out of her life. London, the aunt of her best friend Jessica, has taken her in, becoming some sorts of mother to her. Melanie is an innocent girl and has nothing to do with the world of biker MC’s. Through Landon’s relationship with the president of the Reaper’s MC – their story is told in the previous book in the series, Reaper’s Stand – Melanie meets Painter, one of the club’s protectors. She’s warned by a lot of people to stay away from him, he’s too dangerous for a girl like her.

“You ignored me when you got out, you made me come last night, and now you’re sticking your hand up my shirt while you’re telling me I deserve better. Have you ever considered seeing a shrink? Because I think you could use one.”

Levi ‘Painter’ Brooks is a rough, strong man who is living the dangerous life of an outlaw biker. He’s a patched in member of the Reaper’s MC and acts as a protector to his MC brothers. Besides being a fierce biker, Painter earns money with his art, hence the road name Painter. He knows he’s not a good man, and he knows he should stay away from Melanie – she is too cute and innocent for a man like him. But after a year of writing letters to each other, Painter can’t stay away any longer and comes to stake his claim – and Melanie lets him.

“Men built all kinds of crazy fantasies on the inside— always fell to shit when they got out again. Mel was just another bitch, one with too much baggage. I didn’t really want her. Sure as hell didn’t need her. Right. Who the fuck was I kidding?”

Reaper’s Fall follows the lives of Painter and Melanie over the course of five years, parts of them spend together, but for most of them they are apart. They share a daughter, they love each other, but along the way Melanie loses her faith in Painter – he will always place the MC before her, or so she thinks. The early days of their relationship are good, you can feel the mutual attraction between Melanie and Painter, you can see them working to give it a real chance. A decision made by Painter and the other Reaper’s members changes everything. Melanie is left behind, giving birth to their daughter while Painter is in prison. When he has served his time, she wants nothing to do with him. When they finally get back together, Painter and Melanie have a chance at their well-earned Happily Ever After.

I enjoyed seeing the characters from the previous books in Reaper’s Fall. I‘m glad Jessica has gotten herself together, has left her destructive ways behind, and is living a normal life now. A lot of the inner works of the MC world are shown through Painter’s eyes. I don’t have any experience in this lifestyle, or know criminals, but it feels realistic and not over-the-top. However, the one aspect I didn’t like in the book was the fact that for a long time, Painter and Melanie are not together. I wish there would have been more time when we see them reunite and build a life together. Also, Melanie holds one hell of a grudge, I understand her, but she knows what she’s gotten herself into starting things with Painter.

“I’m not running guns, I’m not selling drugs. I paint fucking pictures, and then I sell them to rich assholes so they can brag about my ‘primitive art’ at their cocktail parties. I’ll take their money with a smile, pay my club dues, and then I’ll always come home to you and Izzy. I love you.”

Although I wish things were different, that Painter and Melanie both made other choices and reacted differently, I still enjoy this story very much. I give it 4 stars.