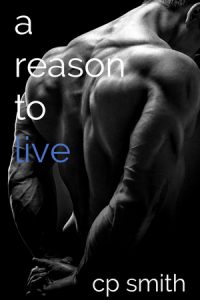 WARNING: Author believes in soul mates and insta-love, proceed with caution if you're not a romantic at heart.

Shane Sherman has a problem. Well, two, actually. One has auburn hair and pale-green eyes, and the other? . . . Is a secret. One he doesn't want to talk about. But all that changes when Sage comes to town.

Sage Sloan is being stalked. So she runs to Trails End and the bravest man her sister said she'd ever met. Sergeant Shane Sherman.

Sparks fly, tempers flare, and bears misbehave as Shane and Sage find a way to coexist in Trails End. That is, until a killer comes to call. Then all bets are off. Shane isn't about to lose his saving grace.

C.P. Smith is one of my go-to authors whenever I’m in the mood for a story with an Alpha and a woman who can handle him. A Reason to Live is the third book in the ‘Reason series’, and takes us back to Trails End, the small Alaskan town introduced in A Reason to Kill, the previous book in the series. A Reason to Live has all the right ingredients I read C.P. Smith’s books for, I love it.

“Sergeant Sherman is the bravest man I’ve ever met. He’s the complete opposite of our late stepdaddy dearest. He runs straight into the battle, disregarding his own safety to help those who are injured. I’m lucky, Sage. Really lucky. I couldn’t have asked for a better commanding officer.”

Sage Sloan has endured a lot during her childhood. Her father died when she was young, and her mother remarried a man who turned out to be very abusive. Not only to her mother, but also towards Sloan and her little sister, Emma Jane. Nowadays, Sage spent her days helping children as a child advocate with Child Protective Services’. Besides her work, Sage and her mother are grieving the loss of Emma Jane who died on the battlefields of Afghanistan just nineteen years old. When Sage starts to receive threats, she remembers the sergeant Emma used to write her about—a good, protective man. In order to escape the threats, she leaves for Trails End, where former sergeant Shane lives and it doesn’t take long before she starts to have feelings for him.

“I’d felt a connection when our lips met. I knew he did, as well, when he’d tightened his hold and buried his face in my neck. Nevertheless, when he left last night, it seemed like he was saying good-bye. So that left me with one question rolling around in my head all night. Should I stay or should I go?”

Shane Sherman is a man changed by the brutal reality of combat, he has seen horrors that change a man forever. To this day, he feels guilty for the death of Emma Jane, a young soldier who – in his opinion – didn’t belong on the battlefield. During her funeral he has met the older sister, Sage, but hasn’t thought of her very much since. When she turns up in Trails End around the anniversary of Emma’s death, Shane reacts badly, telling her to go away. Although he feels himself attracted to Sage, he can’t separate her from her sister Emma.

“The revelation hit him so hard that he ripped open his door without a word to Chester and stormed across the street, looking for Gregor. The words mine to protect sped up his heart and anchored permanently in his brain. He might not be able to offer her a relationship, but she was his responsibility to keep safe.”

Shane and Sage both feel very attracted to each other, but for Shane his guilt over Emma’s death is too much. He firmly believes he has nothing to offer Sage and that she’s better off without him away from Trails End. Luckily, Sage – with the help of a very meddlesome Maxine – doesn’t give up on Shane, and keeps letting him know she doesn’t hold him responsible for Emma’s death. The couple has some intense moments, but when Shane finally comes to his senses and claims his Sage, the chemistry between them is off the charts. From the moment they met, you know this couple belongs together, Shane just needs to work through his issues.

It was wonderful to be back in Trails End, the little town in Alaska. All the funny characters from the previous book are still there, and it was good to see glimpses of their lives. One of the highlights in this book, besides the main couple, is Maxine. I love her meddlesome ways, her naughty business, and how she handles her son and the other men in Trails End. As already said, C.P. Smith is known for her stories with insta-love, her Alpha men, and her sassy leading ladies. A Reason to Live is all that, it completely lives up to my expectations.

“I’m not lettin’ you go. You’re my reason to live. My reason to get up each day and take a breath. My reason to kill if need be, just like Max said. You saved me, Sage. Saved me from myself. You’ve been doin’ it since you cornered me in the parking lot and my heart started beatin’ again.”

I adore this book, it’s as simple as that! I give this story 5 stars. 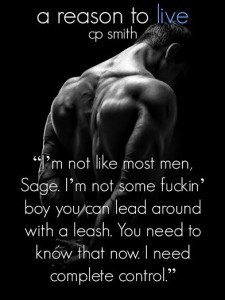