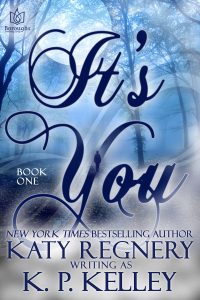 ONCE UPON A TIME...
the most beautiful boy in the world kissed me.
I've never been able to forget.
Perhaps it was his jet-black hair,
or the changing copper-color of his eyes,
the intense way he looked at me...
or the fact that he awakened my passion for the first time,
at once otherworldly yet heartbreakingly real.


After that kiss, I never saw him again.

His name was Jack Beauloup.
Jack, my "Beautiful Wolf."

Twenty years passed.
He has returned.
For me.

It’s You is a new shifter duet by Katy Regnery (written as K.P. Kelley). I know this author for her sweet, contemporary romantic stories, so I was surprised she decided to go for a new genre. While I like to read a shifter story from time to time, the over-the-topness and predictability most of these stories contain places them in the guilty-pleasure department for me. To my surprise, It’s You is a very pleasant exception, I love it.

Darcy Turner is a 35-year-old professor and researcher in the field of Botany. She lives with her best friend Willow in Carlisle, the small town where she grew up. Darcy doesn’t have a man in her life, not because she’s not into dating, but because her mind always goes back to the past. As a 15-year-old Darcy had a crush on Jack, the most handsome boy in school. After one kiss, he disappeared from town, never to be heard of again. Unconsciously Darcy compares every man (not that there were many) with Jack, and she dreams about him often. Seeing him again after twenty years’ intensives the feelings Darcy still has for him, but she also has questions.

“Why exactly should I believe you, Jack? Because. He looked down, and when he looked up again, his eyes were on fire. Because you belong to me. And I belong to you.”

Jack Beauloup is a shifter, and has always known this. Just like he has always known he would meet the one mate for him, probably shortly before his eighteenth birthday. What he didn’t count on was the fact she would be a woman, and not a Roug like he is. After their binding Jack leaves town to lead a lonely life working for his pack. Although twenty years has passed, Jack still feels the bond with Darcy as strong as ever. And now, it’s time to claim his mate.

The moment Jack and Darcy see each other again both feel the bond between them, both know they are inevitable. What started with a sweet, teenage kiss is now so much more and both feel it. Darcy is some sort of relieved to see Jack again, to be able to ask him the questions she has. She knows what they have is special, but some things feel just a bit too weird, almost supernatural. Jack and Darcy slowly begin to build towards something lasting, but secrets and hidden truths are in their way. Since It’s You is a duet, book 1 ends in a cliffhanger, we have to wait for book 2 to see if Jack and Darcy get their Happily Ever After.

Normally when I think of shifter books, I think of over-the-top, insta lust/love stories where ‘the bond’ is responsible for everything and no common sense is needed. Sweet, funny stories, but sometimes a bit too much for me. As already said, It’s You is an enjoyable exception. Yes, Darcy and Jack share a bond and they feel the pull between them, but that doesn’t stop them thinking for themselves. Both question their feelings for each other, both are unsure what the future will bring. Jack isn’t sure how his Roug pack will react to his human mate, and Darcy.. Let’s say Darcy reacts like a normal woman when she finds out the truth about Jack. And I don’t blame her, at all.

I can’t wait for the next book of the It’s You duet, to see if Jack and Darcy get their fairytale and to see more of Jack’s family. I give the first part of the duet 4.5 stars. 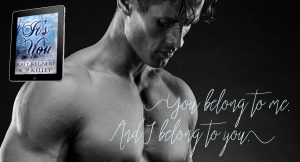