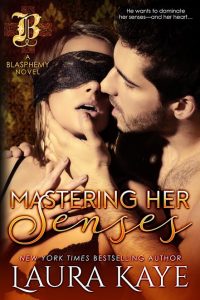 He wants to dominate her senses--and her heart...

Quinton Ross has always been a thrill-seeker--so it's no surprise that he's drawn to extremes in the bedroom and at his play club, Blasphemy, where he creates sense-depriving scenarios that blow submissives' minds. Now if he could just find one who needs the rush as much as him...

Cassia Locke hasn't played at Blasphemy since a caving accident left her with a paralyzing fear of the dark. Ready to fight, she knows just who to ask for help--the hard-bodied, funny-as-hell Dom she'd always crushed on--and once stood up.

Quinton is shocked and a little leery to see Cassia, but he can't pass up the chance to dominate the alluring little sub this time. Introducing her to sensory deprivation becomes his new favorite obsession, and watching her fight fear is its own thrill. But when doubt threatens to send her running again, Quinton must find a way to master her senses--and her heart.

“Those eyes. Hazel with the gold. And he suddenly knew he’d seen them before. Years ago.”

“What did you say?” He crouched in front of her, those eyes darker now. Dark and intense. It was the kind of look a Dom gave you when you deserved to be punished. Cassia almost wished he would.”

Cassia works as a geologist, but a serious accident two years ago changed the path of her career. She also hasn’t given into her submissive since she’s still dealing with the aftermath of being locked up in a dark cave. However, she’s ready to face her demons and returns to Blasphemy to overcome her fears. When Quinton sees how much Cassia is affected by her fears of the dark he offers to help her to defeat them. Cassia can’t resist him…

“But I gotta ask you something first.” “Yes, Sir?” “Did you touch yourself, Cassia? Did you make yourself come since we were last together?” He wasn’t sure whether he wanted her to have broken down or held out. A fast shake of her head. “No, Sir. Even though it was hard as hell.”

“Yours, baby. Do you understand?” “I do,” she whispered, so overwhelmed with love for this man. He placed his big hand against her chest. “Mine.” “Yes,” she said. “All yours.”

I like Cassia and Quinton, I give their story 4 stars. 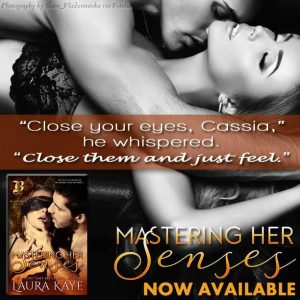