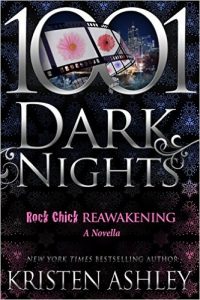 From New York Times bestselling author, Kristen Ashley, comes the long-awaited story of Daisy and Marcus, Rock Chick Reawakening. A prequel to Kristen’s Rock Chick series, Rock Chick Reawakening shares the tale of the devastating event that nearly broke Daisy, an event that set Marcus Sloane—one of Denver’s most respected businessmen and one of the Denver underground’s most feared crime bosses—into finally making his move to win the heart of the woman who stole his.

’The Rock Chick series’ by Kristen Ashley is probably my most reread series ever. I can’t tell you how many times I’ve read the funny, over the top stories of Indy, Ally, the other Rock Chicks and the Hot Bunch. My favorite side-character from the series is Daisy; the sweet, fun, bubbly, yet tough Dolly Parton look-alike. Throughout the series some hints are given about her and her scary hubby Marcus; Rock Chick Reawaking finally gives us their own story.

Daisy has grown up with an uncaring mother who constantly forgot she had a daughter. When she has the opportunity, Daisy leaves and never looks back. A kind employer of her mother – a true Southern lady – taught Daisy to find her true self and embrace her, and that’s what Daisy does. She loves her own style – looking like Dolly Parton – and she knows she looks good. Being a pretty girl, and needing the money, Daisy ends up as a stripper at Smithie’s. She’s not ashamed of what she does for a living, but a brutal attack leaves her reeling. Daisy doesn’t know what to make of the sudden interest of Marcus, the co-owner of Smithie’s.

“Nothing. Miss Annamae had been wrong. Everyone else had been right. I got treated all my life like I’d been treated because that’s who I was. I wasn’t even trash. I was nothing.”

Marcus childhood wasn’t that bad; after his mother left he lived with his father who was a good dad, but who made bad decisions. When one of those bad decisions gets him killed, Marcus moves in with his half-sister Michelle. Growing up with Michelle and her family has shaped Marcus into the man he is today; a hardworking man who goes after what he wants. Not only in business, but also with women. And Marcus knows what he wants when he will settle down; a beautiful strong, kind and smart woman. Everything he sees in Daisy.

“I want to be clear. I don’t want to come on strong.” “Well, you’re failin’,” I shared. At that, he smiled. I felt my throat close. With that smile, the cynicism and sly went right out of his eyes. They were twinkling at me. Twinkling at me.”

Daisy caught Marcus’ attention with her beauty and wide smile. But before he can make a move, Daisy is horribly attacked. This doesn’t change his feelings for her, it only makes them stronger but he must be careful with her. Dealing with the aftermath of the rape, Daisy is in a dark place. She can handle the physical stuff, but mentally the attack did a number on her. Feeling a handsome, rich man like Marcus couldn’t possibly want a damaged stripper like her, Daisy tries to keep her distance. But luckily, Marcus is as stubborn as Daisy, and slowly he works himself into her life and her heart.

The moment I heard the announcement Daisy was getting her own novella, I was one happy reader. I’ve always wanted to know more about Daisy and Marcus, and their life together. Rock Chick Reawakening totally lived up to my expectations, it’s a true Rock Chick story about a feisty, sweet heroine and the stubborn Alpha guy who falls for her. And the epilogue. Oh the epilogue. One word: swoon. My only issue with this story is that it’s only a novella, I want more Daisy and Marcus.

“It was the most beautiful pain I’d ever experienced. And it was the pain of knowing I’d never really needed a castle. I just needed my prince charming. And I’d found him.”

I love Daisy and Marcus and their story. I give Rock Chick Reawaking 5 stars. 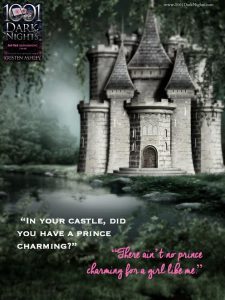 Her face was stunning. Wide smile. White teeth and a good deal of them. Big eyes. Elegant nose. Soft cheekbones. All of this she highlighted with the expert use of makeup from what was clearly a gift of superior genes into something that shone like a Hollywood starlet.

A starlet of a stripper who looked a good deal like Dolly Parton, who also likely got home the night before, earliest, three in the morning, and was right then, only hours later, back on the stage helping another girl by teaching her some moves.

“Marcus, brother,” Smithie’s voice came at him. “You got a problem with the way I do business, and I give you reason to have that problem, then we have a talk. I don’t give you that reason, we don’t have conversations like this one. That’s our deal.”

Marcus listened to him while he watched Daisy talking to the other girl and then she ran across the stage, doing it gracefully in platform sandals, her stone-washed jeans tight on her ass and hips and all the way down her legs. Still, after she ran the four steps, she launched herself high, grabbing on to the pole at least three feet higher than she was, her body swinging around by just her hands.

When the swing ended, she climbed up the pole, hand over hand. Doing this quickly, taking herself up another four feet, she flipped her bottom half over, wrapping her skinny legs around the pole. She dropped back, her hair flowing down, and with her only hold on the pole being her legs, she arched her back and slid down slowly, somehow circling the pole as she did it.

She ended this doing a layout with her hands on the floor, her legs in slow and controlled movements coming over her head one after the other. Her hands pushing off, she was up.