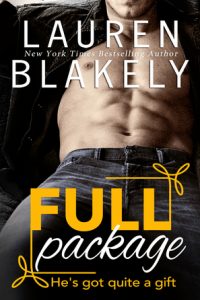 I've been told I have quite a gift.

Hey, I don't just mean in my pants. I've got a big brain too, and a huge heart of gold. And I like to use all my gifts to the fullest, the package included. Life is smooth sailing....

Until I find myself stuck between a rock and a sexy roommate, which makes for one very hard...place.

Because scoring an apartment in this city is harder than finding true love. So even if I have to shack up with my buddy's smoking hot and incredibly amazing little sister, a man's got to do what a man's got to do.

I can resist Josie. I'm disciplined, I'm focused, and I keep my hands to myself, even in the mere five-hundred square feet we share. Until the one night she insists on sliding under the covers with me. It'll help her sleep after what happened that day, she says.

Spoiler--neither one of us sleeps.

Did I mention she's also one of my best friends? That she's brilliant, beautiful and a total firecracker? Guess that makes her the full package too.

What's a man stuck in a hard place to do?

Lauren Blakely is one of my go-to authors for funny, sweet reads. Full Package is her newest RomCom story, told in the guy’s POV with a few thoughts of the heroine throughout the book. We’ve met Chase in Well Hung, as the best friend of Wyatt, but he’s also close with Josie, Wyatt’s younger sister. Full Package tells how Chase and Josie become much more than just friends.

“Has there ever been a guy and a girl friend who get along as well as we do?” I slash my hand through the air. “Fuck no. Not in the history of the world.”

Chase is a fun, relaxed guy who has just started working as an ER doctor at Mercy Hospital. According to himself, Chase is ‘the king of compartmentalization’.. He’s capable of keeping everything separated; love, feelings, sex, everything. Living in New York city is expensive, and finding a place to call home impossible. When Chase and Josie find out about their problems –  him finding a place and her finding a roommate – the answer is simple. But is it wise to move in with your friend who falls into ‘the friend category’ but who’s also a hot girl?

“I’ve got to wonder if that cherry scent is her face lotion, her shampoo, or her body wash? Body wash. My mind is adrift, and the word association begins. Because what goes with body wash but nudity? Naked woman in the shower. Washing. Lathering. Soaping. Ah, hell. Snap the fuck out it, Summers.”

Chase and Josie have known each other for years. As a friend of Josie’s older brother Wyatt, Chase saw Josie all the time, but she’s a good friend to him as well. Living together starts out as fun, but soon Chase starts to see Josie as more than just a good friend, and lines start to blur. But Chase wouldn’t be Chase if he didn’t try to label their new situation. It does take him some time to realize Josie is the woman for him, and that they can be best friends and lovers.

Like Lauren Blakely’s other RomCom heroes, Chase is a swoon worthy guy. Josie is one of his best friends, and I understand he doesn’t want to lose her friendship. But Chase.. Living together with your best friend, having fun and hot monkey sex.. Did you seriously think feelings would stay out of the equation? Silly silly man, that never works. While I wanted to shake some sense in both Chase and Josie, I love their story.

I’ve enjoyed reading Full Package. I give the story of Chase and Josie 4.5 stars. 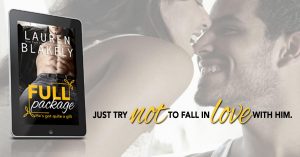 I turn into the kitchen. She pulls a tray from the oven and smiles. She still wears the date outfit, but the heels are gone. She’s adorable in her fancy dress and bare feet.

She nods. “When he invited me to see his gerbil, I thought it was time to go.”

“That doesn’t entice you?”

She shakes her head. “Had he said ferret, perhaps. Alas, with gerbil I’m a firm no.”

“We didn’t get far enough to find out. I said thanks, I need to water the plants, and I got the hell out of Dodge.”

I curl up the side of my mouth. “Guess that explains why Trish didn’t invite me home, either. I tried the hamster line on her.”

I lean against the kitchen counter. “And that concerns you, since you never do that, right?”

As she slides the spatula under the dessert, she gives me a side-eye stare. “Exactly, Chase. I never rub one out. Never.” She waves a hand over her crotch. “Total hands-free zone.”

I take her comment seriously. “Fine. You use toys. I get it. What kind?” I ask, because I can’t help myself.

She rolls her eyes. “Not telling you.”

I harrumph and grab for a bar from the pan. She swats me with the spatula.

“That didn’t hurt. And you should know better than to steal my dessert before it’s ready.”

“You should know better than to hit my hands.” I hold both up in the air.

With a quickness I don’t see coming, she whacks me again with her utensil. This time on the other hand.

“That’s it.” I charge her, tickling her waist. “Tell me what toys and I’ll stop.”

She cracks up and flails her arms, knocking me with elbows and hands and the spatula, too, until I give in to her cries for mercy.

I stare at her in our tiny sliver of a kitchen. “Waiting.”

“You really want to know?”

I nod eagerly. I’m playing with fire, but I can’t resist. The desire to know outweighs all else.

She works the spatula under the bars again, shaking her head. “I can’t believe we’re having this conversation.”

I hold out my hands. “C’mon. We talk about all sorts of stuff.” Then, an idea strikes me. I open the kitchen cupboard, grab a bottle of Patron, and hold it up. “This will help all that shyness.”

She stares at me with narrowed eyes. “I’m not shy at all.”

I grab two shot glasses and pour. “Better safe than sorry, Miss Not Shy At All.”

I hand her one, and she takes it. Then I raise my glass, and the drink goes down the hatch with a burn. She follows suit, swallowing it quickly, then sets her glass down. I do the same.

I rub my palms together. “Toy confessional time. What have you got?”

She arches an eyebrow. “Really? You really want to know?”

I narrow my eyes. “What part of your roommate being a dirty bastard do you not understand? Obviously, I want to know. I’m a guy. This is like Christmas morning. But if this helps . . .”

I pour two more shots then slide her glass over to her. Once more, we down them.

And the temperature in me shoots through the roof. I tug at the neck of my shirt. “For the shower?” I croak out.

“Seeing as we don’t have a bathtub, yes, it would have to be for the shower.”

She nods as she slides the bars onto a cooling rack. Just then I remember she promised me seven-layer bars when she freaked out the other night. And she delivered. Fuck, I think she might be perfect, what with her desserts and her shower hobby. 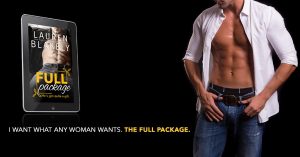 Since self-publishing her debut romance novel CAUGHT UP IN US three years ago, Lauren Blakely has sold more than 1 million books. She is known for her sexy contemporary romance style that's full of heat, heart and humor. A devout fan of cake and canines, Lauren has plotted entire novels while walking her four-legged friends. She lives in California with her family. With ten New York Times bestsellers, her titles have appeared on the New York Times, USA Today, and Wall Street Journal Bestseller Lists more than fifty times. Her bestselling series include Sinful Nights, Seductive Nights, No Regrets, Caught Up in Love, and Fighting Fire as well as standalone romantic comedies like BIG ROCK and MISTER O, which were both instant New York Times Bestsellers. In the fall she'll release WELL HUNG, another romantic comedy. To receive an email when Lauren releases a new book, sign up for her newsletter, laurenblakely.com/newsletter!