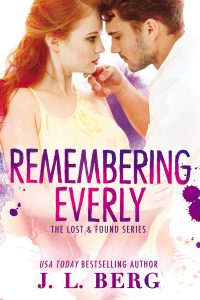 After a stunning cliffhanger ending in Forgetting August, USA Today bestselling author J.L. Berg delivers the happily ever after that fans have been waiting for in the sequel, REMEMBERING EVERLY.

He's forgotten his past, but it hasn't forgotten him. After losing two years of his life trapped in a coma, August Kincaid will do anything to win back the love of his life. But his past threatens to destroy his second chance at happiness, it's Everly who is in danger of paying for his crimes.

A couple of months ago I’ve read Forgetting August, the first part of the Lost & Found Duet. This book ended in a cliffhanger, and Remembering Everly is the conclusion to the story of August and Everly. I love it, it’s all I hoped for.

“Through the years, we’d lost each other over and over—to greed, loss of trust, and a thousand memories scattered in the wind. But our love had never surrendered. We’d never given up on each other and here we were. We’d been lost to each other so many times over. But now, we were found. At last.”

After the ending of the previous book, Everly is back in the arms of her fiancé Ryan, and even though August drove her to him, she can’t stop thinking of her former lover. When she looks deep in her heart, Everly knows it’s still August she loves deeply, but Ryan is the safer man, the reasonable choice. While living her life and moving on, the doubts and second thoughts keep coming, and finally she makes a decision, even when she isn’t sure August still wants her.

“Time froze. The world melted away and there was only him, me, and the swirling sea of emotions swimming between us. His jaw twitched as my heart leapt into high gear. And as quickly as he found me again, his eyes slid away as if I’d never existed. Like I’d never meant anything.”

Where August didn’t have his memory in Forgetting August, in this book he has. He finally understands what has happened between him and Everly, and all he wants is to keep the love of his life safe, even if it means she has a relationship with another man. To realize Everly’s safety, August goes back to his old life, the life that caused him and Everly to drift apart. Knowing Everly is moving on, with pain in his heart August tries the same, even though it breaks him. An unexpected visitor changes everything.

“I didn’t have it in me today—to be happy for others when my life was the exact opposite. Not so closely after seeing Everly in the arms of another, knowing soon she would be his… forever. I just needed time. Time to heal and process.”

Remembering Everly picks up where the previous book ended, and continues being told in a dual point of view. Even though not together, Everly and August think a lot about each other, you can feel their pain and despair. Everly is trying to move on, being supported by her very kind and sweet fiancé Ryan. He still is her second choice, and still it’s something he doesn’t deserve. Bit by bit August is regaining his memories, memories which help him to secure a future with Everly.

“You were right when you said we don’t work when we’re apart. It’s true. We’ve tried and failed over and over and each time, both of us end up hurt and even more broken than before. I need you, Everly. I need you now, and forever. I’ll always want to protect you, but life—whether it’s this one or another—it’s not worth living without you.”

Remembering Everly is the perfect conclusion to the Lost & Found Duet. It’s full of angst and I adore it. I give this story 4.5 stars. 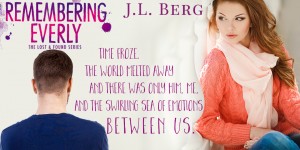 They had the ability to destroy lives, obliterate relationships and sabotage even the strongest partnerships. Big or small…it didn’t matter. Even the tiniest white lie had the power to corrode—to shatter and dismantle everything you loved.

I’d carried a secret so big, for so long that sometimes I felt physically weak from its weight. I had thought I could carry its burden to my grave—that eventually its truth would die along with me.

They live on far longer than we do, and they always find their way to the surface.

Sitting alone in the apartment I shared with my fiancé, I gently rolled the smooth green stone between my thumb and forefinger, over and over, remembering the day it was returned to me.

In all our years together, I’d never seen August so cold. So lifeless.

It frightened me to my core.

But I still hadn’t told anyone. It had been three days and I had yet to tell my fiancé or best friend about the events that had taken place in that bridal shop. As far as Ryan and Sarah knew, August had rudely interrupted my bridal appointment to tell me he had his memories back—that was all.

Nothing more, nothing less.

Why hadn’t I elaborated? I didn’t want to admit my shame. I couldn’t share this secret, my darkest lie. What would they think of me? I was the reason August had been in that hospital bed for two years. And the worst part? I’d lied about it—to everyone.