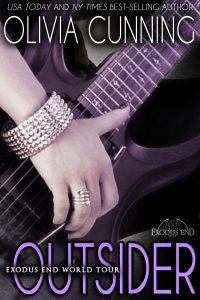 Reagan Elliot should be living her dream…

She’s touring with Exodus End as their new rhythm guitarist and gaining more notoriety and fame than she ever imagined possible.

But sometimes the world sees things differently and is determined to destroy what it doesn’t understand.

Can Reagan’s relationship with Trey and Ethan survive the cruel backlash of the media, her family, and a bigoted public? Or will the talented musician lose everything she holds dear in the face of her own burgeoning doubts?

Reagan, Trey and Ethan are in love with each other, are in a committed relationship with the three of them. Reagan is finally where she wants to, being part of the well-known rock band Exodus End. She has her ups and downs with the band and its manager, but she loves the music. Trey is the sexy guitarist of Sinners, touring with the two loves of his life is all he wants. Ethan works as Reagan’s bodyguard, keeping her safe from crazy fans and all kinds of weird situations. Everything between the three of them is still new, and they are still figuring out the day-to-day working of their partnership.

“She paused long enough to offer Ethan a heated glance, but there was no kiss for him. He doubted she’d ever publicly show how she felt about him. Not as long as Trey was in the picture. And as far as Ethan was concerned, Trey would always be in the picture.”

Although Reagan, Trey and Ethan are very much in love with each other, forming a relationship between three people isn’t easy. Insecurities, ugly thoughts and being afraid for the outside world sometimes take over. For Trey it’s the easiest, he has come to terms with his bisexuality a long time ago and doesn’t care what other people think. Ethan has been confused about his sexual preference a long time, he still needs to accept it fully and tell his family. Reagan loves both her men, but she’s afraid for the reaction of her family and the rest of the world. Trey, Ethan and Reagan each have to make personal steps before they can walk further on their road to a very hot HEA, with the three of them.

Outsider is the second book in ‘the Exodus End series’ and an important part of the plot is entwined with the first book, Insider. The Exodus End members are all nice rock stars who know the drill and are not afraid to party wild. Seeing the band members of Sinners and their ladies is great; all couples are still going strong. But.. This is also a problem for me. Outsider already has three POV’s, three characters who all have a daily life and their own issues. Adding the Sinners and new characters for the next books with each some interaction with the leading trio… It’s just too much in my opinion. Reagan, Trey and Ethan though are just great. I love their commitment for each other, how they want to make it work and how they find ways to do it. And the sex.. It’s still oh so hot.

“You belong to each other and to me, and I belong to you. I have a big crazy mess of feelings inside me when it comes to the two of you, and I can’t imagine anything making me happier.”

I love the story of Ethan, Reagan and Trey, but due to my issues with the book I give Outsider 4 stars. 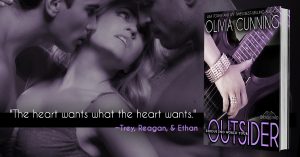