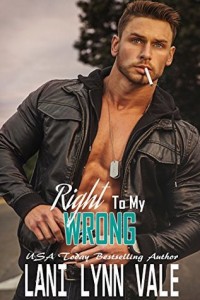 Sterling and Ruthie have more things in common than they realize, even though from the outside it doesn’t seem like they do.

Sterling is a decorated war hero.

Ruthie is an ex-con.

Their two worlds should’ve never collided, but fate has a way of turning life in the direction least expected. Now Ruthie has to try to come to terms with the fact that she’s in love with a biker who’s also a decorated Navy SEAL. One who leaves for months at a time with little to no advance warning, taking her heart with him each time he goes.

Sterling has a lot of things to overcome in order to have Ruthie, the biggest being her mind.

Now it’s up to him to show her just how right he can be.

Right to my Wrong is the eight book in the ‘Dixie Wardens MC series’ by Lani Lynn Vale. Besides book seven in the series, Counter to my Intelligence, these are the first books I’ve read by this author in a long time. I don’t know why I’ve stopped following her work, but after having finished this book I will read the previous books in this series.

“So, what’s your story?” The man at my side asked me. I looked up from peeling the label off my beer and stared at him. He was so beautiful, but everything I would never go for again. Muscular. Military. An Alpha. Those three things combined made for a man who always felt he knew the right way.”

Ruthie’s childhood was tough. Her mother didn’t abuse her physical, but conveniently forgot all about her at times, being too busy with entertaining men. At age ten Ruthie is left behind by her mother in a hospital, never to see her again. Ruthie marries at an young age, but the marriage isn’t happy; her husband is abusive, and when she’s almost eight months pregnant he kills their unborn daughter during a brutal beating. Broken down with grief, Ruthie murders her husband and spends almost nine years in prison, paying the prize for her vengeance. Being back in society is hard on her, people see her as just a murderer, as trash – just what her husband always called her. Ruthie doesn’t think she deserves love, but she can’t help the attraction she feels for Sterling.

If times were different…if life was different…Sterling and I might have been able to pursue what I could feel between us. But times weren’t different, and my life wasn’t all shits and giggles like Sterling needed. I had demons. I had so many demons that it was a wonder I functioned at all. And Sterling deserved a woman that would stand by his side, make him proud to have his arm around her. And I wasn’t that woman.

Sterling has been given up for adoption by his mother when he was thirteen. She was in over her head with the wrong people, giving up her son ensured her his safety. Sterling ended up in a foster family were he meets Cormac and Garrison. They become true brothers, surviving the horrible circumstances at the house, taking each other’s back whenever needed. Nowadays Sterling is a Navy SEAL and a member of the Dixie Wardens MC. Although he’s surrounded by men he considers his brothers, he’s still very closed off about his feelings, not letting anyone in. Sterling doesn’t believe he deserves Ruthie, but he can’t stay away from her.

“Everyone here is so freakin’ mean. All I was doing was walking with a beer in my hand when somebody pushed me from behind. I swear, I don’t understand what I’ve ever done to them. They don’t know me,” she said brokenly. My heart broke. Literally broke into a million tiny pieces for her.”

Ruthie and Sterling are both damaged people, broken and scarred by their childhoods, the abandonments of their mothers and the years in the foster care system. They start out as friends, getting to know each other and just spend time with one another. After Sterling’s secret deployment ends, the couple finally gives in to their feelings, taking small steps on the path to a real relationship. Although Sterling and Ruthie feel a lot for each other, not all goes smooth and easy. Sterling is a stubborn, true Alpha who doesn’t talk about what’s on his mind, leaving Ruthie out in the cold. Slowly, but surely, the couple learns to trust and to communicate, so they have a change at something real.

Right to my Wrong is both a sad and a moving story, Ruthie and Sterling have tragic pasts, both deserve to be happy and loved. My heart broke for Ruthie; what her husband put her through, how she was treated by other people when she got out of prison, it was so sad. I did have a few issues with this book however. The timelines concerning Ruthies age/pregnancy/years spend in prison were a little bit confusing at times. Also, Sterling’s career as a Navy SEAL / biker / professional baseball player felt a little over-the-top to me.

“You’re mine and I’m yours. We’ll make our lives good together. We’ll have babies. We’ll buy a house. We’ll grow old together until we can’t see the other’s faults. We’ll be together forever. And then, when we’re done on this earth, we’ll go out of it together, because I deserve happy, and so do you.  We’re fucking due, and I fucking love you.”

Despite the issues I had with the story, I’ve enjoyed reading Right to my Wrong, and I will definitely pick up other books by this author. I give this story 4 stars.