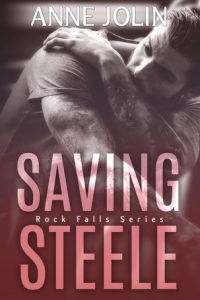 Kennedy Cross had her heart broken early in life. It wasn't someone or something who betrayed her—it was her own body. Despite it being all she’s ever wanted, Kennedy will never know what it feels like to feel her baby’s feet kick from the inside out. Having been pronounced infertile at only eighteen, she redirected her life the best way she could.

Eight years and a degree later, Kennedy is one of the most well-loved first-grade teachers at Rock Falls Elementary School. It doesn’t matter that her college boyfriend left her because he wanted children of his own. She has twenty-two of the most gorgeous six-year-olds who adore her and she wouldn’t have it any other way.

Jackson Steele deals only in extremes. He falls victim to manic episodes lasting for days, sometimes weeks at a time, sending him reeling from volatile highs to devastating lows. It’s a living hell just being inside his own mind, and that hell has taken everything he’s ever loved away from him. But what if, this time, it gives him something? An untimely gift from God and a brunette with legs eight miles long will bring him the most unforeseen joy but also his most challenging of tests.

What happens when circumstances of life threaten the one thing both Jackson and Kennedy love? Saving Steele from himself may prove to be too much for Cross to bear.

Anne Jolin is known for her Alpha men and sweet heroines. Saving Steele is the fifth book in the ‘Rock Falls series’ and has all the right ingredients; an Alpha male, a sweet heroine and a good, not over-the-top storyline. This book lived up to my expectation, I’ve enjoyed it.

“They say people’s hearts skip a beat when they fall in love at first sight. Your heart is so overwhelmed by a rush of love that it stills, for just a moment, forgetting to beat. What they don’t tell you is that the person your heart skips a beat for isn’t always your soul mate. In my case, it was him. My son.”

Kennedy Cross has grown up with parents who weren’t interested in raising a family. From an early age she knows she wants to have children herself and give them all the love she didn’t get from her own parents. Unfortunately, at the age of eighteen she’s told by doctors she will never be able to get pregnant, never can carry her own babies. Nowadays Kennedy works as a first grade teacher at an elementary school, a job she loves. She has come to terms with her infertility, giving her affection to her students. Her love life is non-existing at the moment, there’s no place for someone in Kennedy’s highly organized world and she believes a man doesn’t want a broken woman. Meeting the father of one her new students gives her hope at something more with a man, a real relationship.

“I watched his lips move as he spoke. They were full, the bottom one distinctly fuller than the top, though the top was shaped in a way that made me want to run my tongue across it before I sat… “Kennedy?” I blink. “Oh, what? I’m sorry.” “You got me?” Did I get him?”

Jackson Steele is a hard working man, he owns a construction company which has started taking off. During his early teens, Jackson has been diagnosed with manic depression, his black as he calls it himself. During his episodes he does all kinds of things, but doesn’t remember what happened when he comes back to his normal self. When a six year old boy arrives at his doorstep claiming to be his son, Jackson vaguely remembers the aftermath of an encounter with a co-worker during one of his blacks. Seeing so much of himself in the boy – Ryker – he immediately falls in love with him and takes full responsibility. The minute he meets Ryker’s schoolteacher, who happens to be the little sister of a good friend, he can’t stop thinking about her.

“He”—I nod toward Ryker but don’t let her hand go—“doesn’t call me dad yet. I haven’t wanted to push.” Her mouth forms a little O and I am sucker punched in the gut by it. Colt’s sister is a knockout and she has no fucking clue.”

From the moment they meet each other, both Kennedy and Jackson feel the pull between them. Kennedy – the nice woman she is – offers Jackson to help with Ryker when needed, given the special circumstances. To his shock, Jackson finds Kennedy’s help cute and endearing, he doesn’t mind she re-organizes his house to make it suitable for a six year old. I love to see how Jackson handles Kennedy’s over-the-top organizing, how she slowly learns to let go and learns to live without planning. It doesn’t take long before the couple gives into their feelings for each other, both want a shot at something real.

Besides the main characters, Kennedy and Jackson, I love six year old Ryker. He didn’t have an easy start in life with his mother, but he still is a sweet and curious boy, like a child his age should be. The story of Jackson and Kennedy is sweet, the struggle this couple has to deal with is brought upon by outsiders, the love and feelings they have for another is never in question. What I also need to address; I like the fact the author didn’t pull the ‘infertility – but pregnant anyway’ card. I’ve read this storyline to many times, and I’m glad Anne Jolin chose to write Kennedy’s issues the way she did.

“I want you to think of me. To think of my hands and those little pieces of paper all over your body and remember how much I love you.” “Jackson,” I whimper his name this time. “You don’t need to be afraid to live your life, Kennedy, not anymore. I’ll always be here to catch you.”

Saving Steele is a great book with easy flow, a sweet, quirky heroine and an Alpha hero. I give this story 4 stars.

~~ Saving Steele was provided in exchange for an honest review ~~