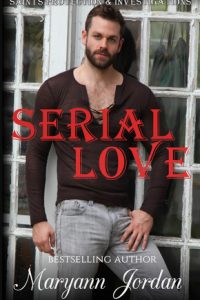 Jack Bryant left the Special Forces to begin his private investigation business. Pulling together like-minded men from the CIA, FBI, ATF, DEA, Border Patrol, SEALs, and police, they were devoted to the missions that no one else wanted or could solve.

When the Campus Killer strikes again, Jack’s team is tasked by the Governor to find the killer, using whatever means they can.
While following the trail of the serial killer, he becomes entangled in the life of the beautiful woman living next to his property.

Bethany Bridwell moved in with her grandmother to take over running Mountville Cabin Rentals. She had no time for the handsome, mysterious man living next door who continued to intrude into her life...and her thoughts.

Jack battled his growing feelings for Bethany, worried his life would not allow for the white-picket-fence world she should have. But he was unable to stay away.

When the trail of the Campus Killer strikes close to home, can Jack protect Bethany long enough to give her the future she deserves?

Jack Bryant is an army man through and through, he has joined the ranks as soon as he got his associate’s degree. When he resigns from the Special Forces after a long career he opens his own company, Saints Protection & Investigation. In his employment are well-trained men coming from other disciplines like the Navy Seals and the CIA. Together they work for whoever hires them, all in the name of good. Due to his work and what he has witnessed during his operations, Jack know he’s not dating material. His assignments take him away from home for days, and there’s always the possibility something can go wrong. Meeting his new neighbor Bethany makes him questioning his own reasoning.

“The way his body responded to being held against hers. The protective stance she assumed when guarding Ann. The fierce glance in her eyes that could change to one of affection when aimed at her grandmother. What would it be like to have those eyes turned on me? To harness that courage and passion.”

Bethany Bridwell has given up her life and work to take care of her aging grandmother Ann, and to run the cabins Ann and her late husband started decades ago when they just got married. She is content with her life, she spends it with the woman she cares deeply for and she enjoys her work – meeting a man and fall in love isn’t a priority for her. When her grandmother goes for one of her walks and Bethany goes after her, they come face to face with the men of Saints. After a little hostile start, Bethany feels herself attracted to Jack.

“It had been so long since she was interested in a man. Someone more than an occasional date. His rugged handsome looks drew her in, but it was his intensity that held her gaze. As though he would stop at nothing to slay my dragons. And then…nothing.”

Jack knows he isn’t relationship material – he is convinced he can’t give a woman the white picket fence – but still goes after Bethany, much to the amusement of his team. Bethany falls for him quickly, realizing he is the man she could spend her life with. Unfortunately, it takes Jack longer to come to the same conclusion, causing Bethany some heartbreak. When all of their issues are settled, the couple can start their lives together.

Besides the romance between Jack and Bethany, a major part of the book describes the Saints search for a brutal serial killer. To be honest, I like this part of the book a little better than the evolving relationship between our main couple. I already knew they would get their Happily Ever After, Maryann Jordan always gives her couples one. The killer was an unsure element, given the small insides in his mind I really wanted to know who he was, and why he killed those poor girls.

This story is written in the style Maryann Jordan is known for. It switches between POV’s quite often, but once you’re used to this form of writing it’s enjoyable and gives you an inside look in the minds of both characters without the repetition of scenes.

“I was a fool, willing to throw away a chance at what we have here outta my fear that I couldn’t concentrate on the business and have you in my life. I know now that, no matter how we work this, I want you.”

Serial Love is a typical Maryann Jordan story – a though Alpha hero, a sweet, sassy heroine, a dose of mystery and danger, and great side characters. I like this book, but because of the predictability I give it 3.5 stars.