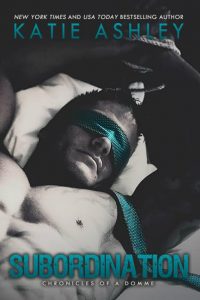 When Sophie Jameson first became a domme at Club 1740, it was more out of financial necessity than it was for personal pleasure and sexual exploration. But over the years as she rocked her leather corsets and boots while wielding every crop and flogger imaginable, she grew to love the thrill and adulation that her clients brought her. But all along, her path in life and her heart was with a different profession—one she was planning to embark on at the summer’s end.

And then he changed everything. Tall, dark, impossibly built—William was the complete opposite of whatever image a male sub conjured up. After all the subs, Sophie finally felt true lust and desire. Although he was the proud stallion who needed breaking, he became the one to make her break all her rules and let down all her walls.

But it was just supposed to be for that one night, but an accidental encounter days later outside Club 1740’s protected walls had the two seeing each other in a different light—as simply Sophie and William, not Domme and sub. While they should have parted ways, they couldn’t. While they should never have gone back to her place, they did.
And that simple mistake has a serious price for both of them.

“A prime piece of submissive man like this usually belonged to someone. And if he didn’t, he would normally be snatched up by a Domme practically before he got through the door, least of all across the dance floor. I couldn’t help wondering what his story was. More than anything, I wondered what it might be like to have a session with him.”

“Hmm, have my unwanted overtures made the usually mouthy Domme speechless?” I tore my gaze away from my hands to look at him. “I’m sorry, but you did take me a little off guard. This entire day has taken me off guard…more than anything, you take me off guard.” “I do?”

When Sophie meets William on her last day at Club 1740, and he asks her for a session, to her surprise she agrees. What starts out as a normal session for Sophie, it soon turns into a whole new experience for her. Meeting each other again outside the Club – in real life – leads to spending time together and other sessions, growing the attraction they feel for one another. Sophie decides to stop seeing William, being a teacher and a part of the BDSM world don’t mix in her mind. Although Sophie and William have had hot, passionate sex, they don’t share a lot about their personal lives and occupations. To her disbelief, Sophie meets William again during her first day at school. The couple tries to fight the pull between them, but in the end they decide to give their love for each other a real chance.

Sophie is a strong girl who knows what she wants and does all she can for her for her loved ones, her dad and her younger half-brother. Because her father is suffering from a terrible decease, she does all she can to help out financially, lifting at least that burden from his shoulders. But how she makes her money is something Sophie keeps hidden, she isn’t ashamed of what she does, but she knows a lot of people aren’t that open-minded. Subordination is told from Sophie’s point of view (POV), therefor we only see her reasoning, her way of thinking. Since I read a lot of books in a dual POV – other books by Katie Ashley are also in a dual POV – I somehow miss the look inside Williams mind.

“You don’t have to be afraid. But even if you are, I’ll be strong enough for both of us.” I surveyed the intensity of his expression. “I know you would walk through fire for me, and not because it was the request of your Mistress. It would be because you love me.” I brought my mouth to his. After a tender kiss, I murmured, “And I love you,” against his lips.”

~~ Subordination was provided in exchange for a honest review ~~