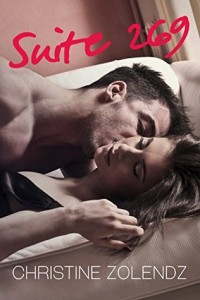 Leave your inhibitions at the door and make your fantasies come true.

Three weeks.
No rules.
Any fantasy.
Anything goes.

Lexa Novak would like nothing better than to let go and finally experience it all, so when the opportunity arises to just do that, she can't refuse—won't refuse.

But what happens when your fantasies become your realities?

Find out when you enter Suite 269.

Lexa Novak is getting married in three weeks, but comes home after her bachelorette party when she sees her fiancé Kevin in action with her nemesis from work, Sophia. While she’s heartbroken, she’s also furious with her fiancé, she just can’t believe he would cheat on her – with one of their colleagues – three weeks before the wedding. Hearing the things Kevin says to Sophia convince Lexa he isn’t going to stop seeing her after the wedding – kicking him out of her heart and home is the only option. While Lexa is nurturing her broken heart, a midnight snack next to a candy machine changes the dynamics between herself and Jameson Holt, her employer.

“His eyes never left mine; light hazel eyes, almost green, yet almost golden. A strange, intoxicating mix. Darn, I was caught in his playboy mating call, wasn’t I? He had those super testosterone laser eyes that made women just want to hand him their panties.”

Jameson is the recently appointed head of the company Lexa works for, after taken this role over from his father. He doesn’t do serious relationships, but for the last few months he has been seeing Sophia. He is a very good-looking, wealthy man and he can’t wrap his head around the fact she’s been sleeping with Kevin – the mailroom guy and Lexa’s fiancé – behind his back. Yes, it was casual and nothing serious, but he didn’t expected it. Seeing Lexa at an unforeseen moment, without her professional armor, his reaction to her takes him by surprise.

“I stood up, strangely possessed, not wanting anyone else to see her either. A paradox of emotions filtered in. I wanted her legs around me, to feel her soft skin under my lips, yet I needed her covered. My movements were jerky, but I tugged of my shirt and wrapped it around her shoulders.”

From the moment Jameson sees the real Lexa, and Lexa notices Jameson, both feel very attracted to each other. They form an instant friendship, while Lexa is coming to terms with the cheating of her fiancé. Because his relationship with Sophia was more casual, Jameson has no problem breaking it off without a second thought. While a little intoxicated, Lexa confesses to Jameson she has some fantasies, sexual fantasies she is willing to fulfill with him. Together, they go on Lexa’s already paid-for honeymoon, spending a sensual time in and around suite 269 in Jamaica. Back in the real world, some things have to be taken care of before Jameson and Lexa can have their Happily Ever After.

I love Jameson, Lexa, their chemistry, and the funny, honest conversations. Their relationship is starting out as a rebound, but soon all kinds of real emotions are involved. Jameson’s dirty minded smartphone puts a smile on my face, for some reason he kept saying the most inappropriate words at the wrong times. I really liked the couple’s best friends – both were supportive and didn’t mind saying what needed to be said.

This story is nothing what I expected from the blurb, but I love it, plain and simple. I give it 4.5 stars.