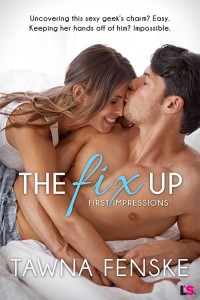 Uncovering this sexy geek's charm is easy. Keeping her hands off of him is impossible.

While he may look like the love child of a movie starlet and an NFL linebacker, Ben Langley has the people skills of a half-drowned porcupine. Why socialize when there are chemistry labs and bad sci-fi flicks? If he has any hope of taking the helm as CEO of the family business, Ben needs an image makeover. Pronto.

Enter Holly Colvin, owner of First Impressions public relations and branding firm, and the woman who just saved Ben from the clutches of an over-attentive sales clerk. Holly's rebranded hundreds of companies in her career, but she's never rebranded a person. The guy clearly needs help, though, and she's just the woman for the job.

With the clock ticking for them both, Holly and Ben face off over wardrobe malfunctions and business jargon that sounds a lot sexier than it should. But can Holly make Ben into the man he thinks he should be without losing the man she's starting to love?

I have picked out The Fix-Up based on the cover and the book blurb. Tawna Fenske is a – for me – new author, so I was curious going in. This book certainly didn’t disappoint, for me it is an entertaining and sweet read, ideal for a Sunday afternoon.

“Her lips parted slightly, almost like she was braced for a kiss. Or was that his imagination? It seemed hot in here, and he was getting dizzy, and now all he could think about was claiming those perfect lips.”

Holly Colvin is the proud owner of her own business, First Impressions, that helps companies with their public relations and branding. She is very good at what she does and likes it, even though the hard work has caused her marriage to fail. After Holly’s now ex-husband turned out not to be supportive of her work, flat-out told her a woman needs other priorities in life, she doesn’t date very much. According to Holly most men share the believes of her ex, and since she’s capable of taking care of herself, why bother? When she meets Ben during a lunchbreak, Holly feels herself attracted to him, but immediately decides not to act.

“If those were the kinds of thoughts running through her head, there was no way in hell she should take any job that put her in close proximity with this man. She’d shared one moment with him at the furniture store. As cute as he was—as hot as that kiss had been—this was business. Her career. Her life.”

Ben Langley has finished High school early, and started college at only sixteen. He has spent all of his time studying and learning, leaving no time to develop social skills with people his own age. Although Ben has grown is a very handsome man, he still is a true geek, with no people skills. This is a little bit of a problem, since he recently has taken over his father’s CEO role, leading the family business, Langley Enterprises. Up until this point, Ben has worked at the engineering side of the business, being the acting CEO is a whole new game for him. Growing up, Ben has witnessed the devastating effects his father’s long, odd working hours and cheating had on his mother. He promised himself never to become the man his father was, never to treat a woman like that. Meeting Holly awakens all sorts of unknown feelings in him.

“I’m sure you’ll come up with something,” she murmured. Her mouth looked so soft, so inviting, and he could have sworn her lashes fluttered low the way they might if she were waiting for him to make a move. A big move. He knew what he needed to do. What he wanted to do. And with that, he bent and kissed her.”

Becoming a CEO isn’t something he has aspired, but Ben knows that with this role, the possibilities of expending the philanthropic arm of Langley Enterprises is within reach. Hiring Holly means they get to spend a lot of time together, something he absolutely doesn’t mind. Although Holly finds herself very attracted to Ben, she’s trying to keep things professional, since he hired her to rebrand himself into a believable CEO. Ben understands her reasoning, but he just can’t stay away from her. After the ending of her disastrous marriage, Holly has sworn off workaholics like her ex, but Ben is determined to change her mind.

The Fix-Up is a sweet and easy read, it’s written in a very pleasant writing style and there isn’t much angst or outrages twists and turns. The main characters, Ben and Holly, are very likeable, just as the supporting characters Miriam and Parker. Ben’s father – Lyle – is an old-fashioned, sexist business man who sees women just as arm candy. The advices he gives Ben in the women department are so horrible they become just laughable. I’m glad I personally don’t know men who share his way of thinking and his actions, it would infuriate me.

“Ben smiled back and squeezed her hand tighter. “Five, six, seven, eight—Holly, I think you’re really great.” He leaned forward and kissed her. “In fact, I think I kinda love you.” Her stomach rolled over like a giddy puppy, and Holly fought the urge to crawl into his lap. “That doesn’t rhyme,” she said, kissing him back. “But I love you, too.”

The Fix-Up is my very first read by Tawna Fenske, and I’ve enjoyed it. The epilogue hints at a second First Impressions book which I’ll certainly want to read, just as the other books already been written by this author.

I give this book 4 stars.

~~ The Fix-Up was provided in exchange for an honest review ~~

The sound of Ben’s voice from the dressing room stall jarred her from her incessant planning.

“I’m having a bit of a problem here.”

“What sort of problem?” She stood up, ready to help. “What’s wrong?”

“There’s a thread or something caught in the zipper. I can’t get the pants off.”

She hesitated, resting a hand on the wall of the dressing room. “Do you want me to help?”

“You know, this really isn’t how I envisioned you offering to remove my pants.”

She felt the heat creeping into her cheeks again, torn between the embarrassment of the situation and the thrill of knowing he’d basically just admitted he’d thought about her taking off his pants.

It was a joke. Don’t get too excited.

“Should I go find Marcus?”

“The clerk. That’s what his nametag said, anyway.”

“I should pay more attention to stuff like that.”

“There’s your first lesson in public relations—always look for nametags.” She lowered her voice a little and glanced toward the door. “And based on the attention Marcus was paying to you, I get the sense he wouldn’t mind taking off your pants. What is it with you and sales clerks?”

Ben muttered something unintelligible that was probably some sort of engineering curse. “I’m about five seconds from whipping out my pocket knife and cutting the damn things off my body.”

“Don’t do that! They’re the only pair in your size and they don’t even need to be tailored.”

“I’ve been at this for ten minutes already.”

“Are you sure you’re sliding it the right way?”

“I have a doctorate in engineering,” he muttered. “I’m pretty sure I understand how a zipper works.”

She hesitated at the edge of the dressing room, biting her lip. “Do you want me to try?”