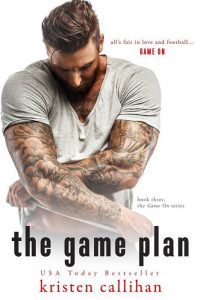 A beard-related dare and one hot-as-hell kiss changes everything.

NFL center Ethan Dexter’s focus has always been on playing football and little else. Except when it comes to one particular woman. The lovely Fiona Mackenzie might not care about his fame, but she’s also never looked at him as anything more than one of her brother-in-law’s best friends. That ends now.

Fi doesn’t know what to make of Dex. The bearded, tattooed, mountain of man-muscle looks more like a biker than a football player. Rumor has it he’s a virgin, but she finds that hard to believe. Because from the moment he decides to turn his quiet intensity on her she’s left weak at the knees and aching to see his famous control fully unleashed.

Fi ought to guard her heart and walk away; they live vastly different lives in separate cities. And Dex is looking for a forever girl. But Dex has upped his game and is using all his considerable charm to convince Fi he's her forever man.

The Game Plan is the third book in the “Game On Series” and focuses on Dex and Fiona, who we’ve met in the previous books. Dex is the bearded, silent guy – when I heard he was getting his own book I was very curious about the man and the woman who would claim his heart. This book is all I hoped for.

Ethan ‘Dex’ Dexter is a very successful football player. As a popular athlete, he is used to the perks that come with his career—lots of fans and women who throw themselves at him. Only, Dex isn’t interested in women who offer themselves to him just because he is an athlete. A very awkward and humiliating situation in college has made him promise himself he won’t go for cheap and temporary. He is looking for a real girl and a meaningful relationship. He doesn’t mind this means not having sex and staying a virgin until he finds the right woman. For the last couple of years, he has had some intense feelings for Fiona ‘Fi’ Mackenzie, the sister to one of his best friend’s wives. When he gets the opportunity to spend a week in her presence, he does anything he can to convince her that they should be together.

“I shouldn’t have done it. But my brain took a vacation. I know how good I am at manipulating a situation, and I saw the curiosity in Fi’s bright green eyes. So I cajoled, enticed, all but dared her to get up close and personal with my face. Had I expected her to kiss me? Hell no.”

Fiona is hard-working; finishing college and starting to work in the real world takes up a lot of her time. Her last boyfriend was a nice, mellow guy, but witnessing what her sister has with her husband – an all-consuming love and need – makes her want more. Dex hasn’t been on her radar. Since her father was a cheating athlete himself, she doesn’t want a man who’s profession provides him all kinds of temptation. And besides, she doesn’t want her man to be build huge and have facial hair. A short, very hot moment in a local bar changes everything.

“Shit. I really don’t know what the hell I’m doing. Because it sounds a lot like flirting to me. Instinct tells me flirting with Ethan Dexter isn’t something to do lightly. And there’s the fact that I don’t go for athletes. At all.”

Although Dex is inexperienced when it comes to women, he knows exactly what he wants, and he has no problem communicating that. He finds an equally outspoken woman in Fiona. While Dex and Fiona both live very different lives and live in different, distant cities they just can’t deny the enormous attraction between them. After they spend a week together helping out Gray and Ivy, they continue to see each other whenever possible. I love that they both have their own lives, and the realness I’ve felt to their long distance relationship. I understand their way of thinking, how to handle the different ‘tests’ thrown at them by life. I’ve truly enjoyed the moment Dex and Fiona decided to go for it, to give their Happily Ever After a real chance.

I adored this story – it felt so real, so normal, two people with two different lives deciding to be together. I’ve also enjoyed to see the characters from the previous books, The Hook Up and The Friend Zone. Gray and Ivy as parents are adorable as well as realistic, I still remember my sleepless nights with a crying newborn. This is an easy read, but the problems both Dex and Fiona had to conquer to be together were tough and very lifelike.

“But this girl— the one who inspired me to sing my ass off on a stage, who brings me gumbo when I’ve shown her my worst— she makes me whole. She helped me find myself. Fi is done running, and I am over hiding. It’s as simple as that.”

The Game Plan is an easy, sometimes predictable, read. I however love it and highly recommend this book. I give this story 4.5 stars.