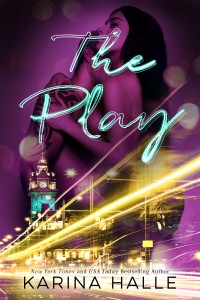 A troubled Scottish rugby player who doesn't play by the rules.
A vivacious man-eater who's given up on love.
When it comes to Lachlan and Kayla, opposites don't just attract - they explode.

Kayla Moore has always been comfortable with her feisty, maneating reputation. At least it was fine until she hit her thirties and saw her best friends Stephanie and Nicola settle down with Linden and Bram McGregor, leaving Kayla to be the odd one out. Tired of being the third wheel with nothing but one-night stands and dead-end dates in San Francisco, Kayla decides to take a vow of celibacy and put men on the backburner.

That is until she lays her eyes on Linden and Bram’s cousin, hot Scot Lachlan McGregor. Lachlan is her sexual fantasy come to life – tall, tatted, and built like a Mack truck. With a steely gaze and successful rugby career back in Edinburgh, he’s the kind of man that makes her want to throw her vow right out the window. But Lachlan’s quiet and intense demeanor makes him a hard man to get to know, let alone get close to.

It isn’t until the two of them are thrown together one long, unforgettable night that Kayla realizes there is so much more to this brooding macho man than what meets the eye. But even with sparks flying between the two, Lachlan can’t stay in America forever. Now, Kayla has to decide whether to uproot her whole life and chance it all on someone she barely knows or risk getting burned once again.

Sometimes love is a game that just needs to be played.

Having enjoyed The Pact and The Offer, I was (not so patiently) waiting for the next book in the series. I liked Kayla in the previous books, and I wanted to know more about her and the man she would fall for. Reading the blurb only made me want this book more. And it didn’t disappoint with all the emotions it made me feel.

Lachlan McGregor didn’t have an easy start in life; being abandoned at the young age of five by his mother at an orphanage has left a huge mark on him. Troubled and scarred by his past, he tumbled in an even deeper pit during his teenage years. Luckily, with the help of his last foster family, the McGregors, he changed his life around for the better and gets a chance at a bright future. Nowadays, Lachlan is a well-known Scottish rugby player; he’s successful on the field and has casual relations with beautiful women. But despite his success, he’s still a quiet, somewhat withdrawn, man who doesn’t let other people in and still fights his demons. Meeting Kayla awakens feelings in him he didn’t think possible.

“I’ve been thinking about her ever since the impromptu rugby match, ever since she left my flat in my clothes, ever since I saw her at the bar. The way she looks at me… it’s not just that she wants me, because I know she does. It’s that… I feel she might see me, too. Beneath the layers.”

Kayla Moore goes through life working, partying, hooking up with strangers, and taking care of her elderly mother. Seeing the deep and meaningful relationships her dearest friends have with their men, makes her feel lonely. Her lifestyle and work don’t satisfy her anymore; swearing off men and casual hookups is easy, however, her problems at work are harder to fix. When she meets Lachlan, she immediately feels attracted to the broody, silent man and falls hard for him.

“He places his beautiful hands on either side of my face, holding me in place, his nostrils flaring as he breathes in hard. It’s as if he’s trying to restrain himself, and I want him to let go and unleash it all on me, everything that he has.”

Lachlan and Kayla dance around each other for a bit, but you can feel the enormous attraction between the couple. They can’t stay away from one another, and together they are wild and explosive. While they connect on a physical level, you can feel Lachlan holding back. He doesn’t want Kayla to know about his past. Kayla has her own issues to deal with; she’s being misunderstood at work and by people in general. Also, the idea of an all-consuming love scares her, seeing how devastated her mother was, and still is, after the death of her father. The couple wants to be together, but their past and experiences tell them otherwise. I have been incredibly happy, almost to the brink of tears, when they finally realized they couldn’t live without each other.

It was good seeing the couples from the previous books, they have Lachlan’s and Kayla’s back and support them where they can. Although I’ve liked The Pact and The Offer, both couples in them made me mad with their actions at times. In this book this doesn’t happen. I’ve felt so much for both Lachlan and Kayla. Especially Lachlan, who had to go through so much, deserves a woman who loves him with all her heart and nothing less. I love the realness in this book; the struggles and concerns they had to endure.

“I give myself to her, to feeling the warmth, the ferocity of her kiss. It brings me back to a beautiful world, one I never thought I’d live in again. I bury my hands in her hair, holding her head, feeling her as our mouths move sweetly against each other in a slow, intoxicating hunger. I can’t believe I’m kissing her again, touching her again, feeling her again.”

I love The Play, plain and simple. It’s written in the beautiful style Karina Halle is known for. I give this heartbreaking story 5+ stars.