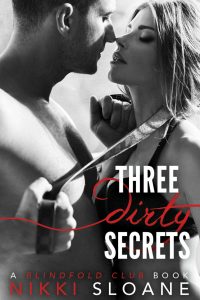 No man can own me. I negotiate sex for money at an illicit blindfold club, but my body is not for sale. I don’t submit and I don’t surrender.

Until I meet him. This beautiful artist’s tattoo now covers the scar of the worst mistake of my life.

Being with him could expose everything I’ve been hiding, and although there’s so much at stake, I can’t stop myself. The battle for control between us is too hot, too powerful to resist.

With all my dirty secrets, what’s going to happen when he forces me to come clean?

My go-to author for good and naughty romance books is without a doubt Nikki Sloane. I love her stories and the characters she writes. Three Dirty Secrets is the fourth book in ‘the Blindfold Club series’, telling the story of Regan – who we’ve met in the previous books– and Silas. This book lived up to my expectation, I love it.

“Holy shit. Holy fuck. The look of pure desire, of total want, the one I hadn’t seen from a man in months, was etched on every inch of Silas’s face. Lust . . . for me. My breath lodged in my chest as he rose up off the motorcycle until he loomed overhead.”

Regan Adams is a strong, confident woman with a double-life. During the day she works as an FBI agent, building cases against the people who deserve it. At night, she works as a negotiator at the Blindfold Club, negotiating the transactions between the girls and the clients. Two years ago, an undercover FBI assignment ended badly, leaving Regan somewhat scarred and more detached then before. To cover up her visible wounds, Regan decides to make an appointment with a tattoo artist, Silas Getty. From the moment she meets him at the tattoo parlor, she can’t take her eyes of the attractive man.

“Hot. Greedy. Dominating. These were words I could use to describe his mouth. My surprise kept me still as his hard kiss assaulted. His strong, skilled hands touched me, one grasping my chin between his thumb and forefinger, and the other was splayed out on my rib cage. The heat of his rough palm soaked in through my bare skin. It lit up every nerve ending in my body.”

As already said, Regan is a very confident woman; she knows what she wants and takes it without regret. Silas is just as assertive, causing the couple to fight for dominance whenever they get together. When they come together though, it’s hot and explosive. They have an amazing chemistry and are equals in every way. Regan keeps certain parts of her life closed off from Silas, causing a major drift between the couple. When Regan finally is able to admit she can’t do it all by herself, she and Silas have a fair chance.

Being the fourth book in the series, the characters from the previous books made an appearance. I’ve loved seeing them again, and to witness Payton and Dominic’s special day (the couple from Three Hard Lessons). Nikki Sloane is known for her sizzling threesomes, but just as in the other books, the threesome doesn’t take anything away from the growing feelings between the main characters. This is their live, and both are confident to be able to share their sexual adventures with another woman. Besides that, it suits their dominant characters. One minor detail, since this story is written from Regan’s POV, I miss Silas’ thoughts and reasoning’s.

“I’m going to tell you that secret again,” he said. I laughed. “It’s not a secret anymore.” “Yeah? I love you.” I set my palm against his cheek. “I love you.” “Just for tonight?” His expression was guarded hope. “For tonight. And tomorrow night. For all the nights, Silas.”

I love this book! It has everything I read Nikki Sloane’s books for, I give this story 4.5 stars.

~~ Three Dirty Secrets was provided in exchange for an honest review ~~