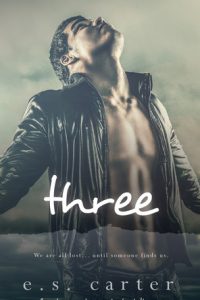 I gave her everything, including my body and would have given her more.
I gave her ‘I love you’ …she told me her heart was filled by another, there was no room left for me.

We could never be.
What we did was wrong.
It didn’t feel wrong to me.

The deepest hurt is a love that you cannot have. It will last the longest, cut the deepest and feel the strongest.
It is an imperfect love; a disfigured circle that never ends.
You cannot control it; it's as simple as blinking and just like blinking the more you try to stop it, the more the pain consumes you.

This is book 3 in 'The Love by Numbers' series.
Although it contains characters from the previous books, it can be read as a standalone.

Three is my very first book by author E.S. Carter. Some of my friends keep talking about her books and how much they love them, so I decided to give her latest a chance. I’m so glad I did. It’s a sweet book about real people with real struggles and emotions, trying to figure out how their relationship could work given their circumstances.

“When I gave myself to her, I gave her my entire being. My heart, my soul, my blood, my bones. It wasn’t enough. I wasn’t enough. She chose someone else, someone who already filled her heart and I despise the person who gets to have her love. I despise them with all the parts of me that I freely gave to her.”

Liam Fox-Williams is a 23-year-old guy living the dream; working and living on the party island Ibiza, managing his older brother’s nightclub. But under his friendly and outgoing personality there’s a sad and hurt young man. Four years ago, he was set aside by the woman he considered the love of his life, without a clear explanation, leaving him with nothing but questions and hurt feelings. When he’s visiting his family in England, a chance run-in with Cari – his former love – brings back everything and all he wants to know is: Why?

“In order for us to stand a chance, she needs to be the one to initiate things. I need to know she not only loves me but is willing to fight for me. Love; just a four letter word that is easy to spell yet impossible to define. I may need her to prove I’m worthy of fighting for, but for her, I’m all set to go to war.”

Cari Pritchard has one big responsibility in her life, her eight year-old sister Seren. After the deaths of their parents, Cari has become Seren’s mother, a challenging task since Seren has a severe form of Autism. Four years ago, she was madly in love with Liam, but she felt she couldn’t share herself between him and her young sister; Seren needed her and Liam deserved more then what she could offer him. So, with pain in her heart, she had send him away, giving him the chance to find somebody who could give him everything. Meeting Liam again after all this time on a sidewalk brings back all the buried feelings she still has for him.

“I never felt lonely with Liam; he was my cure, my antidote, my elixir vitae. He pushed back the waters of loneliness almost to the point of drought. I couldn’t allow him to be that for me as my life is so diseased, so draining that I couldn’t let him drown with me. So instead, I let him go.”

Four years ago, Cari and Liam had a ‘forbidden’ romance; he was the student, she the young art teacher. Although they waited until Liam was 18, the couple kept their romance hidden from everybody, family and friends included. When Liam and Cari meet again, it’s obvious the feelings they had for each other are still there, the love they both felt – and still feel – isn’t gone. Slowly, the couple gets to know each other again. And this time it’s not about the two of them, three people are involved now because Seren is a big part of Cari’s life now.

While I feel hurt for Liam – how his heart was broken – I understand Cari’s reasoning for pushing him away. She honestly believed it was in Liam’s best interest, that life with her and Seren would be too much of a burden for him, that she hadn’t enough love to give him, love Liam deserved. Not getting back together with his Cari isn’t an option for Liam, and he goes out of his way to prove to her he wants all in. Cari wants to be with Liam just as much, and finally sees they can be together, that she has a life besides work and the care of her sister. What I also must say; I love the fact that Liam isn’t the typical book hero, that he isn’t drowning his hurt in alcohol and meaningless hookups. I’m glad E.S. Carter chose to write Liam the way she did.

“I loved you with every part of my juvenile heart and even then I knew you loved me back. Now I stand before you, not as that young boy, but as a man; a man who still loves you with all his heart, but that love has evolved into so much more.”

Three is a beautiful second-change love romance, I give this story 4 stars.