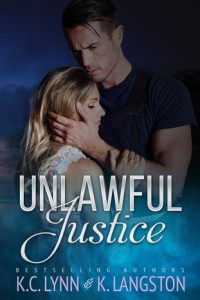 Seek the truth and you will find justice.

The peaceful town of Harmony Falls, Texas, has been rocked to its core by an unspeakable crime.

One that harbors revenge and injustice.

Schoolteacher Olivia Bradshaw can’t remember what happened that horrific night, but it’s easy to see the effect it’s had on those around her. All she wants is for peace to be restored to her beloved hometown, but Deputy Grayson Taylor is on a different mission. He seeks truth and justice, and he’ll do whatever it takes to find both for Olivia.

Lines will be crossed.

Can justice prevail, or will the citizens of Harmony Falls succumb to the corruption and hate that continues to plague their small town?

K.C. Lynn and K. Langston have teamed up to bring you a story about hate, race, corruption, injustice, and above all, love. A story that may change the way you view the world.

Olivia Bradshaw is a young schoolteacher who believes in equality and chances for the less fortunate in society. After her parent’s death she has been raised by her grandparents, now living with just her grandfather on the family farm. After her last relationship ended on a bad note, she stays clear from men and is content with her life; teaching, making jewelry, and looking after her elderly grandfather. Olivia is a sweet girl, who sees the best in people and doesn’t expect the worst. When a break-in at the farm goes horribly wrong, events are set in motion, events that not only change her life, but also that of the townspeople. She finds her rock and savior in the form of Grayson, one of the town’s deputies.

“A warm swarm of butterflies take root inside of me when I think about our date this Friday. I still can’t believe he asked me, especially when I was such a stammering idiot, but he didn’t seem to notice. At least it didn’t seem like it by the way he was looking at me, like he wanted to kiss me… devour me.”

Grayson Taylor is a good and honest man, as a deputy he serves the town of Harmony Falls and protects its people. Having been the star quarterback in high school made him quite popular back in the days. Still today people talk to him about football, although those days are long gone. He is also spending a lot of time with his mother, who still suffers from the death of her husband. Even before the break-in at the Bradshaw farm, Grayson has noticed the sweet teacher, he can even remember her from high school, always in the company of a book to read.

“Seeing her like that, so vulnerable and scared, it fucking undid me. Never in my life have I felt so helpless. I just wanted to take it all away for her. The fear. The anxiety. The nightmares. She’d awakened a part of me that only sought to protect her. And that was something I would do at any cost.”

Meeting in the aftermath of the attempted break-in isn’t the most ideal place, but slowly Olivia and Grayson establish a friendship. They both feel very attracted to each other, Grayson was the boy Olivia dreamed about during high school, but they take things slowly. Due to circumstances out of Olivia’s control, she is brutally attacked, paying a price that isn’t hers to pay. Racial issues arise and split a town still stuck in the past in two. In order to help Olivia, Grayson vows to seek justice for her. Recovering from her ordeal, Olivia finds peace in the arms of Grayson, and it doesn’t take long before they confess their feelings for each other.

Unlawful Justice is not just Olivia and Grayson’s story. It’s a tale about a very topical subject that raises headlines and protests all over America; police brutally and racism. Me, as a white female living in a safe neighborhood in the Netherlands, can’t even imagine what it’s like to live in an environment where things like that happen – the hostile treatment of people just because of their skin color. I think the authors did a good job portraying the town of Harmony Falls, where ghosts from the past were still existing beneath the surface. The story of Unlawful Justice feels real, with real people, and real emotions.

“I know it hurts right now, but what you found out tonight doesn’t reflect who you are. You’re still you and you’re still mine. I know you will find a way to make all of this right again. Just like you always do, and I’ll be there with you every step of the way.”

I adored this story, even though some terrible, horrible things happened. I love Olivia and Grayson as the main characters, as well as the secondary characters; Pap, Tania and Terrell. I give this story 4.5 stars.