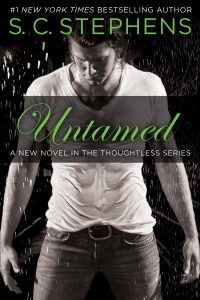 #1 New York Times bestselling author S.C. Stephens brings us the next book in her Thoughtless series!

The spotlight doesn't only shine. Sometimes it burns.

Being the bad-boy bassist for the world's hottest band has earned Griffin Hancock some perks: a big house, a fast car, and most importantly his incredible wife, Anna. The one thing it hasn't brought him is the spotlight. Anna tells him to be patient, that his talent will win out. But Griffin is through waiting for permission to shine.

Without warning, Griffin makes a shocking decision and takes the gamble of a lifetime. Suddenly he's caught up in a new level of lights, cameras, and chaos. One that pushes his relationship with Anna to its limits. Anna has always found his unpredictable behavior sexy, but lately he's seen an ache in her eyes--and it has his soul in knots. Just as the recognition Griffin seeks is finally within reach, the thing he loves most in life could be slipping through his fingers...

Shortly after I have discovered the romance genre I read a book called Thoughtless. Reading the series has given me so many mixed feelings – I was sad, angry, disgusted, and hopeful – but I loved the series as a whole. One character that has stood out for me was the highly inappropriate Griffin, his actions and antics frustrated me to no end. Learning that he was getting his own book has made me very curious, I really wanted to see the inner thoughts of a true D-bag.

Although Griffin is a married man nowadays, with a daughter and another child on the way, he still is an immature, self-absorbed ass. Griffin does what Griffin wants, not matter how much he annoys other people – including his wife Anna – or hurt their feelings. In Griffin’s own world, he’s a god with awesome ideas, held back by people who misunderstand and don’t appreciate his awesomeness. Being part of a very successful band makes Griffin a wealthy man – he’s living the life of a Rockstar with an overly expensive house, an outrageous car, and all kinds of other indulgences. He has formed a loveable team with his equally outspoken wife Anna, who shares his love for sexual antics, and is able to keep up with him.

“I’d waited in the background long enough, been playing an instrument that had been assigned to me long enough. This tour, everything was going to change. It was my time to play lead guitar, my moment to shine in the spotlight. I was going to rule that fucking stage, and no one was going to stop me.”

Being the awesome god Griffin believes he is, he’s starting to get more and more upset with his friends and fellow band members. All his life he has dreamed about being the center of attention, the star of the show. For good reasons Kellan, Matt, and Evan don’t want to give him a chance, but Griffin, being the stubborn D-bag he is, doesn’t see it that way. All he sees is his hopes and dreams being denied by the people he considers family. After being denied a place in the spotlight – he believes is his – once more, he makes a rash decision that impacts him, his family, and the band tremendously.

“Anger ran up my spine, heating my skin and making every hair on my body stand on end. I was so sick and tired of him telling me what to do, holding me back. They all fucking held me back. Well, no more. I was making my own mark on the world, starting today.”

Trying to find his own way to success, Griffin makes stupid decision after stupid decision. The most disturbing thing is that he keeps things hidden for Anna, doesn’t talk to her about what is going on, and doesn’t consult her. When troubles keep piling up and all finally blows up in his face, Griffin’s biggest fear becomes a reality; Anna leaves with the kids. He now has two choices: continuing his chosen path or start fighting for his family and making amends for all of his wrong-doings. Fortunately, Griffin chooses option number two. Gradually, he starts to mature into a man who acknowledge his mistakes and comes to peace with his place in the world. When he and Anna finally reunite, he is the loving husband she deserves and needs.

I have enjoyed seeing all of the characters from the “Thoughtless Series” again. I’ve missed them and it was good to see how they were all doing. Though, I do feel a little sorry for the misunderstood Griffin, I completely understood the other band members. For the first part of the book, he’s an immature idiot who has no regard for other people’s feelings and lives inside his own head. I’ve felt sorry for Anna and what he put her through. She is a devoted wife who trusts her husband to make the right decisions for the family they have. I would have reacted the same way when placed in the same situation.

“What a fucking fool I’d been, and how blessed I was to be given another chance. I didn’t deserve her, but I’d make it my life’s mission to be a better man. And with her firmly by my side, maybe one day I would be.”

This is not so much the tale of Griffin and Anna, this is the story of Griffin becoming a better man. I give this story 4 stars.

~~ Untamed was provided via Netgalley in exchange for an honest review ~~