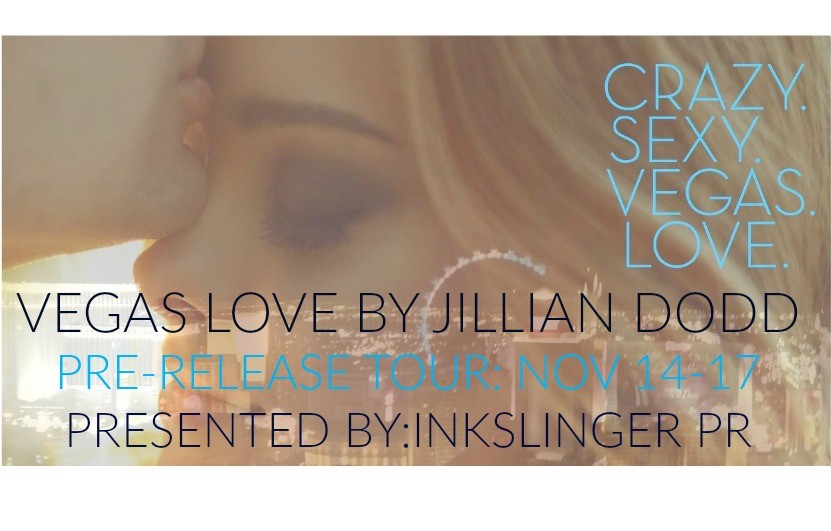 Hollywood actress, Ashlyn Roberts, just had the worst week of her life. Her ex released a sex tape of them and just when she was convinced her current boyfriend was a keeper for standing by her side, he breaks up with her at a friend’s wedding. She’s planning to drown her sorrows in booze when she meets a sexy stranger as she’s leaving the wedding and they end up in Vegas, married.

Cash Crawford is offered a dream job working with his brother as a junior talent agent. He’ll put his shiny new law degree to good use and make a bunch of money in the process. His first task is simple: Keep Ashlyn Roberts out of trouble and don’t sleep with her.Which might be kind of tough, since they definitely consummated their Vegas wedding.

Will this one night stand end in the quickie divorce they promised each other? Or will they realize they got lucky in love?

Vegas Love is a new standalone book by Jillian Dodd, following the lives and love story of Ashlyn and Cash. I’m a new Jillian reader, and this is the first book I’ve read written by her. Going in, I expected a sweet and easy read, and I surely wasn’t disappointed!

Ashlyn Roberts is a well-known actress, she enjoys her career and works hard. She didn’t have a normal childhood, and due to that the bond between her and her mother is cold. At the moment, she’s dating the oldest member of a popular boyband, and although her subconscious warns her, she thinks a marriage proposal is in the air. When a sex tape of her and her ex-boyfriend surfaces, a tape made without her knowledge, the current boyfriend breaks things of at a wedding party. It’s then she meets a very attractive stranger who looks kind of familiar and all of her rules are forgotten.

”Sexy is standing in front of the altar wearing a black tuxedo. Tears fill my eyes. God, he’s so handsome, and funny, and sincere. Why can I find a guy like him for real?”

Cash Crawford is the typical twenty-something man we meet in a lot of books: handsome, rich, and after his last serious relationship enjoying a string of meaningless hookups. He is a friendly and swoon-worthy guy, who is starting to work for his brothers’ talent agency. For some reason he doesn’t recognize Ashlyn at the wedding party, doesn’t realize she’s a famous movie star. Finding her gorgeous, sexy, and funny, it doesn’t seems a stupid idea to ask her to marry him the same night he meets her.

”And while I’m having fun and banging a whole lot of chick along the way, I really do want to find the right girl. A girl who loves life and wants to live it with me, who’s smart and sexy and cute an impetuous. But until I find that kind of girl, I’m sure as hell going to have fun.”

What follows after their meeting at the wedding party of good friends, is a wild Vegas night, lots of sex, alcohol, fun time, everything you can think of. When they separately return to their normal lives, getting a divorce or an annulment seems the most logical choice, but for some reason they want to make it work. They do feel very attracted to each other, and honestly like one another. Since Cash’s new job is keeping Ashlyn out of trouble, keeping their relationship and marriage a secret from his brother is a priority. Not having a family to speak of, Ashlyn doesn’t want to cause Cash any trouble with his family and tries to push him away. Cash does everything he can to prove to Ashlyn they belong together and can make it work.

I enjoyed the sweet moments between Ashlyn and Cash, their honest conversations and funny antics. I also liked that there were things left to the imagination. I like sexy time in my romance books, but is shouldn’t take away the focus off the main story. However, Ashlyn is a well-developed character with issues and emotions, whereas Cash felt a little flat sometimes. Although this is a standalone book, story lines for the Crawford siblings are set out for possible future books, and I really hope Jillian Dodd will write them.

”I have a confession to make, I don’t just Vegas love this girl. I’m madly, impetuously, stupidly, happily, crazy in love with her.”

I like this story, it’s a sweet and easy read, just as I expected. I give it 4 stars.