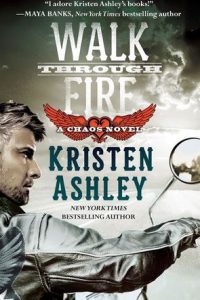 Millie Cross knows what it's like to burn for someone. She was young and wild and he was fierce and even wilder-a Chaos biker who made her heart pound. They fell in love at first sight and life was good, until she learned she couldn't be the woman he needed and made it so he had no choice but to walk away. Twenty years later, Millie's chance run-in with her old flame sparks a desire she just can't ignore. And this time, she won't let him ride off . . .

Bad boy Logan "High" Judd has seen his share of troubles with the law. Yet it was a beautiful woman who broke him. After ending a loveless marriage, High is shocked when his true love walks back into his life. Millie is still gorgeous, but she's just a ghost of her former self. High's intrigued at the change, but her betrayal cut him deep-and he doesn't want to get burned again. As High sinks into meting out vengeance for Millie's betrayal, he'll break all over again when he realizes just how Millie walked through fire for her man . . .

Every time the release date of a book by Kristen Ashley is approaching, I start to feel a little restless. A few days before release day I don’t even start a new book I haven’t read yet, I just can’t keep my thoughts with it. I love Kristen Ashley’s books—both the way they are written and how they make me feel. At some point, I feel a big lump forming in my throat, while at other parts my heart makes little, joyful hops. Walk Through Fire makes me feel everything, the good and the bad, I love it.

Millie Cross is living a calm existence, content with her business and relationship with her family and friends. In fact, she’s just existing, she stopped really living when she was 21 years old and broke things off with the love of her life – for reasons only known to her and her sister, Dottie. Giving up Logan Judd has been the hardest thing she ever had to do in her life, but it was best for him, or so she thinks. To this day, she feels an overwhelming grief and sadness when thinking of all the things that could have been. When Millie meets him again after two decades, she decides it is time to tell him the truth, to tell him why she has broken of their beautiful relationship.

Logan, or High as he is called by his brothers and friends, has just ended his marriage to the mother of his daughters. He has not loved her when he married her, but with a child on the way he thought it was the right thing to do. When Millie has left him twenty years ago, it almost destroyed him. He has loved her so much and did not understand why she broke up with him, he still doesn’t. When he sees her again after all those years all kinds of feelings take hold of him, the most overwhelming of them all—anger. He doesn’t react very well and takes his rage out on Millie, who’s just a shadow of her former self.

“The move with her lipstick was smooth. But he saw it in her eyes even if she tried to hide it. She was scared. She was in too deep and she was in denial. It had been his win. So he’d take what she had to give until she went under and he’d make sure that was in a way she wouldn’t try to surface again. Then she’d be in his rearview.”

When young High and Millie meet there’s an instant bond, an attraction that cannot be denied. They move in together within six weeks of meeting and they have a beautiful time together. When Millie sends High away from her and the love they share without giving him the real reason, both are devastated. When they meet again after twenty years and both having lived an unfulfilling life, High unleashes all of his anger and hurt on Millie.

My heart broke for her, reading Millie’s most inner thoughts and the love she still fells for High; the way he treated her was just cruel. I also felt very bad for High. Twenty years ago, he thought he has had it all, a good life and most important the love of a good woman, until he didn’t. All those years he has felt a pain in his heart, a pain that couldn’t even be cured by his two daughters he loves very much. When High finally learns why Millie send him away, he goes out of his way to make things right with her, so she can be the woman she truly is, his woman.

This is the fourth book in the Chaos series, and it is good to see all the characters from the previous books again. I love this group of people, the brothers of the Chaos MC and their women, how they have each other’s backs and are there for one another. I was a little upset how everybody, and more specifically the men, treated Millie in the first part of the book. Cruel and harsh words were spoken which had a huge impact on her. I was so glad when all was out in the open how everything changed. I really loved Millie’s sister Dottie, she had her back and helped her during the time apart from Logan. Who I also really like? Logan’s ex-wife Deb. She is a good mother who wants best for her children, even if it includes forming some sort of friendship with the love of her ex-husbands life.

I love Walk Through Fire, plain and simple, it is everything I hoped for and so much more. I love the Happily Ever After High and Millie deserve and the promise of future stories for the Chaos bikers. I give Walk Through Fire 5+ stars!