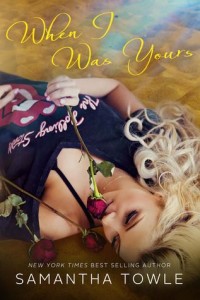 “Marry me.”
“What?” I stared back at him, unblinking.
He moved closer, taking my face in his hands. “I love you, Evie. I look into the future, and the only thing I see clearly is you. Marry me.”

Of course, I said yes.

Twenty-four hours later, I married Adam Gunner at a Vegas chapel to the sounds of “Livin’ on a Prayer” by Bon Jovi. Not the best omen. I get that now.

Then, exactly one week later, I left him. I walked out, leaving behind my wedding ring, annulment papers, and my heart, and he never knew why.

I haven’t seen him since. Not in ten long years.

Now, he’s here, standing before me. Looking at me with nothing but hurt and hatred in his eyes, he wants answers.

Answers I can’t give.

When I Was Yours is the first book I’ve read by Samantha Towle. It was recommended to me by a friend, and I instantly liked the blurb and the cover. Besides that, I love a second-chance romance – two people with a past, who never stopped loving each other, trying to make it work again. Reading this book I was certainly not disappointed, all the ingredients for a good second-chance romance are present.

Adam Gunner is a mess, growing up in luxury with a dysfunctional family at best has left him scarred, the disappearance of his beloved wife after just one week of marriage has ruined him. Although they married at a very young age, Adam felt things with her he hadn’t known for all of his life, he certainly didn’t feel with his parents or other girls. Nowadays Adam is a manwhore, trying to avoid women who look like his ex, but always in the company of a woman who knows the score – nothing serious, just a good time. When he sees his ex-wife Evie for the first time in ten years, all the hurt and anger he still feels come out, he demands the answers he still needs.

“No matter what was happening between Evie and me, I always wanted her— even when she was pissing me off, which was not that often. But wanting her now, after what she did to me… I’m not really sure what that says about me. Probably that I’m fucked up.”

Evie Taylor met the man of her dreams at the young age of 17, and married him at 18. Even though she has left him after a marriage of just one week, she still loves him with all of her heart. Leaving him was the most difficult thing she has ever done, and she still feels the pain – the day she left Adam, she stopped truly living. Coming back to the place she left isn’t easy for her, but is necessary for the education of her younger sister. Seeing Adam again makes her feel terrified, she still feels she can’t give him the answers he needs.

“He couldn’t let go of not knowing the truth, why I left him, whereas I couldn’t let go because I never could find a way to stop loving him. Our reasons may have differed, but ultimately, we were in the same position.”

The relationship between young Adam and Evie is a sweet and real, they love each other and want to spent their lives together. Outside forces make Evie to decide to walk away from all she holds dear. The present Adam and Evie are full of hurt and anger, both hide important information for each other. Under all the pain, the attraction and feelings are still present – it pains me to see two people who obviously still feel so much for each other can’t tell the truth. When all cards are finally in the open, the couple can start slowly to rebuild the relationship they once had.

This book takes you from the present time to the past, and back. This way you can see the sweet, evolving relationship between Adam and Evie when they were so young, and their reuniting as adults. I understand Evie’s reason for leaving, why she did what she did, she still was so young back then. What I didn’t understand, was she didn’t return sooner, to explain all to Adam. During their ten-year separation, Adam tries to stop his grieve over Evie by having sex with her look-alikes, a lot. I understand his reasoning and behavior, but I don’t like the fact Evie herself stays celibate during all those years, doesn’t even kiss another man. Besides the relationship between Adam and Evie, I adore Max. The friendship between Max and Adam is a good and honest one, he is always there when Adam needs him – providing valuable advice.

“I’ve loved you from the first moment I saw you sitting up here, and I’ve loved you all the time in between. Every second of every minute of every day for the last eleven years, I have loved you. And I forgive you for not telling me the truth. I understand why you didn’t. Now, I need you to forgive me, too.”

I love this book, the story of Adam and Evie feels real, and I like Samantha Towle’s writing style. I give this story 4 stars.