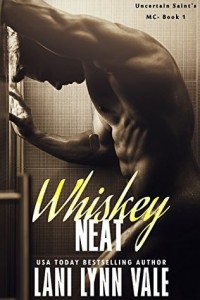 Griffin Storm wasn’t prone to violence, but when someone takes what Griffin holds dear, the world as he knows it is gone.

Retaliation, revenge and rage fuels him. His club, the Uncertain Saint’s MC, do their best to offer support, but Griffin is beyond redemption. He’ll do what he has to do. Kill who he has to kill.

He doesn’t care if that means he dies. If it gets him what he wants, then it’s worth it.

He fakes it all until the night he walks into a sex shop for batteries and lays eyes on a woman that will change his life.

Lenore makes him think past tomorrow. Makes him want to see just what the future might bring.

But his life’s a dangerous one built around pain and deception, and not for the faint of heart.

He won’t give up the past, not until he’s done what he promised to do.

And if that means she’s not there when the dust settles, he’ll risk it.

Lenore, though, won’t give up on him. She’ll fix him, whether he wants her to or not.

Whiskey Neat by Lani Lynn Vale is the first book in her new series, ‘the Uncertain Saints MC’. It’s more of a romantic suspense then just a romance book. It has all the author’s normal ingredients, a rough, handsome hero, a sweet heroine and a storyline with a lot of action. Since this is the first book in a new series, besides the main couple, the men of the next books are being introduced. I’ve enjoyed reading this book.

Griffin is a sad and angry man going through the motions. Six months ago, his young son has been killed in a seemingly random drive-by shooting, leaving him behind full of hurt, rage, and questions. He spends his days working as a Texas Ranger and his free hours are spend with his brothers from the Uncertain Saints MC – a new, small MC located in the town of Uncertain, Texas. He doesn’t need a woman in his live, but when he meets Lenore, he can’t stay away from her. She calls to him, making him want more from life then seeking revenge for his son’s death.

“She had long red hair… I preferred blonde and short. She had freckles and never wore makeup. I usually went for women with painted-on faces, who wore enough mascara to make them look mysterious. She was everything I never went for in a woman, so why did her innocence attract me like it did?”

Lenore is living a calm and peaceful life, she has her family, her dog, and she’s very close with her best friend. Besides owning a sex-shop in a small town in the conservative state of Texas, Lenore volunteers at a shelter for abandoned and mistreated animals. She has no time for dating, and she isn’t looking for a man in her live. When she meets Griffin, she immediately feels herself drawn to him, and for once, she lets her herself go.

“You would think after owning a sex toy store for four years that I would be beyond blushing. But, boy oh boy. The man currently standing in front of me was to die for. Drop dead gorgeous. Tall, blonde, and so, so handsome. Okay, I need to stop reading romance novels.”

Griffin and Lenore are very attracted to each other and have great chemistry. But there isn’t much time for romance. Griffin is hunting down his son’s killers and Lenore has problems of her own to deal with. Although they have amazing sex, Lenore wants more of Griffin’s time, time he’s – unknowingly to her – spending on finding the killers. Once all is out in the open, the couple can work on their relationship and towards their bright future.

Whiskey Neat basically tells two stories. On one hand, it’s the story of Griffin and Lenore finding love and built towards a future. On the other hand, it’s also very much – and maybe even more – the story of Griffin’s search for his son’s killers and him and his MC brothers fighting organized crime by their own rules. While I’ve enjoyed reading the story, I did have some issues with this book. For example, the observation skills of her best friend were unbelievable. How could he not see his wife and his best friend didn’t get along?

“You’re my woman?” He asked. I nodded my head. “I’m your woman.” “You want my babies?” He asked roughly. Joy surged through me. I nodded. “I want nothing more in this world than to have your babies. To be with you for the rest of my life.”

Despite my issues, I’ve enjoyed reading Whiskey Neat, and I definitely will pick up the next book, Jack & Coke. I give this story 3.5 stars.

~~ Whiskey Neat was provided in exchange for an honest review ~~