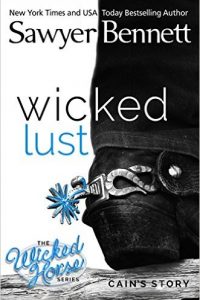 Cain Bonham is as big and bad as they come. After serving in the Marines, he’s returned home to Wyoming and now works as head of security at the exclusive sex club, The Wicked Horse. His job is to protect not only the patrons, but to zealously guard the secret existence of the club itself.

Sloane Preston is all about discovering secrets. As an undercover reporter, she’s determined to reveal the truth behind the facade of The Wicked Horse and expose it for all the world to see. She just didn’t count on her pathway into the club coming at the hands of one gorgeously scarred and bad ass bouncer who manages to easily possess her body and soul.

While Cain’s not looking for anyone to catch his eye, Sloane did it all the same, and he’s not bemoaning the fact that she’s as wickedly kinky as he is. As both get caught up in the sinful fantasies that only The Wicked Horse can create, secrets and loyalties will be tested and hearts will risk being broken.

**Warning: this book has sex in it. Lots of sex. Dirty sex. The Wicked Horse Series is a bit different than what Sawyer Bennett normally writes. While you’ll still enjoy fabulous characters, a suspenseful story, some witty banter and an epic romance, there’s just… a lot of sex. You’ve been warned.

Wicked Lust is the first book I’ve read by Sawyer Bennett and going in I knew it would be an easy, very naughty read. This book certainly didn’t disappoint, and it won’t be my last book written by this author.

“And I have imagined it before. I’ve imagined all sorts of dirty things, read about even dirtier ones, but never thought those activities were really possible. Never really believed that there were men out there who would enjoy doing that. Seemed like fiction to me. Romance fiction to be precise.”

Sloane Preston is a reporter on a undercover mission for a political newspaper; get dirt on governor and his daughter by investigating their ties to a secret sex club which is operated through the Wicked Horse. She takes her job serious, and wants to deliver to her boss. After a few weeks she has decided Cain, head security of The Wicked Horse, is her way in to the sex club. Sloane feels attracted to Cain, therefor gaining his attention in order to get further into the club isn’t a big deal.

“He’s tall and built like a brick wall, his tight, black Security t-shirts hugging those biceps perfectly. I’m not put off nor scared by the large scar that runs along the ridge of one such perfectly sculpted cheekbone. The scar suits him because otherwise, he’d just be a pretty boy. Instead, he looks raw, edgy, and utterly gorgeous in my opinion.”

Cain Bonham works as head security for the Wicked Horse and the sex club, The Silo. Since his disastrous marriage ended he isn’t looking for a new relationship, he getting his rocks of with enough women. One of the benefits of working for the Wicked Horse is a membership to the sex club, something he frequently and happily uses. Meeting Sloane stirs feelings in him he didn’t participated on.

“He lets out a gust of air that I can feel brush my face as I pull back to look down at him. I expect to see lust, because I certainly started feeling him get hard underneath me as I sat on his lap. And that’s there, for sure, but I also see something that sets me on edge… in a sexy way. His eyes are calculating… as if he’s going to test me.”

When Sloane and Cain finally talk to each other – after weeks of staring at one another – after an incident at the Wicked Horse, it doesn’t take long before they give in to their lust. Feelings are in the mix, but both know this isn’t something for the long haul. Together they have some wild, hot sex, including a very hot encounter with some of Cain’s friends and co-workers. When Sloane mentioned her fantasy to Cain, I had the feeling she did it more to lure him into taking her to the sex club, then it was an actual fantasy she wanted to explore. After some revelations Cain and Sloane give into their feelings of love for each other, and decide to give a real relationship a chance.

Wicked Lust is the second book in ‘the Wicked Horse series’. It’s a well written and naughty story with some intense sex scenes. Although I haven’t read the previous book – The Wicked Horse – I didn’t get the feeling I was missing important information. Through Cain’s eyes you get an inside look at The Silo, the ‘hidden’ sex club, were some intense things happen. It didn’t surprise me a certain character will be the leading lady in the next book, Wicked Need. Will I read the previous book? Oh yes, I certainly will and I will pick up the next book.

I enjoyed reading Wicked Lust, it was a sexy read without angst or over-emotional moments. I give this naughty story 4 stars.

~~ Wicked Lust was provided in exchange for an honest review ~~